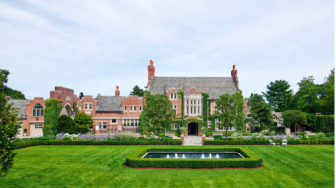 A 19-percent surcharge? Report says, “These billionaires can afford it.”

Whatever fiscal sacrifice is proposed Wednesday by Gov. Dannel P. Malloy to close a budget shortfall of $1.7 billion, a liberal coalition will be standing by with an alternative already rejected by the governor — raise more than $500 million by nearly quadrupling the income tax on hedge fund managers.

A union-financed coalition called the CT Hedge Clippers is stepping up its long-shot lobbying campaign with a glossy report portraying a half-dozen Connecticut hedge fund billionaires as a new generation of Gilded Age fat cats deserving of a 19-percent surcharge on top of the 6.99 percent state income tax they already pay.

The featured six are described as owning billion-dollar art collections, private planes and lavish estates. They invest in “dirty fossil fuels,” question the extent of climate change and pay fines for polluting. One bought and sold Hostess Brands, the baker of Twinkies, at a steep profit, slashing the workforce.

“We highlight these individuals not to go go after these particular people and make their lives difficult, but to show there is an excess of wealth here and these guys are doing things that are harmful to the environment,” said Lindsay Farrell, the executive director of the Working Families, a member of the coalition. 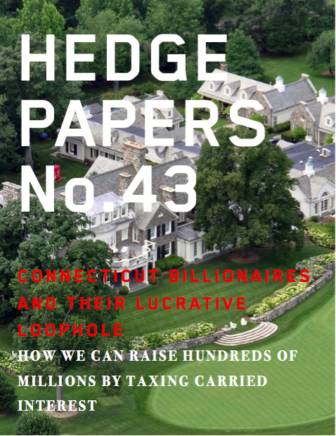 The cover of a report to be released as the governor proposes his budget.

The hedge fund industry, whose trade association does not employ a lobbyist in Hartford, has largely ignored the legislation co-sponsored by 35 lawmakers as less of a serious legislative proposal than an argument for a reform of the federal tax code, whose “carried interest” provision extends a major tax break to hedge fund managers.

Their income is taxed as capital gains under the federal code, capped at 20 percent, while ordinary income is taxed at a top rate of 39.6 percent. The 19-percent surcharge symbolizes the difference between the 20 percent now paid and the one that President Trump, as well as Hillary Clinton and Bernie Sanders, said during the campaign should be paid.

While the Working Families would make the state tax code an instrument for what it sees as economic justice, the hedge fund managers get no tax break on their Connecticut taxes as all income is taxed by the state at a top rate of 6.99 percent, whether it is wages or investment income.

“The more I read about it and the more I talk about it to people, the more I am convinced this legislation is nothing more than a political stunt,” said Bruce McGuire, founder and president of the Connecticut Hedge Fund Association.

Political stunt or not, Joseph McGee of the Business Council of Fairfield County says the legislation is an affront to a financial services industry that is a major economic driver in Connecticut.

The state is the world’s third-largest home of hedge funds after New York and London.

“This is an a national issue,” McGee said of the carried interest provision. “For Connecticut to step in and impose additional taxes on the hedge fund industry without the national reforms Trump is talking about would be suicidal.”

If passed, the state legislation would take effect only if Massachusetts, New York and New Jersey adopted the same surcharge — a hedge against the funds jumping the state lines, at least in three nearby northeastern states.

Florida also has been pitching its low-tax, warm weather climate to hedge funds managers and other high earners.

Barry Sternlicht, the chairman of the Starwood Capital Group, became a resident of Florida last year and told Bloomberg news his former hometown of Greenwich was possibly the country’s worst housing market, saying, “You can’t give away a house in Greenwich.”

(Bloomberg followed up last month, reporting that home sales in Greenwich picked up in the final quarter of 2016 as sellers became more amenable to flexibility on prices.) Home prices still were 26 percent off the peak in 2006, before the recession.

Rep. William Tong, D-Stamford, a city in the heart of a financial services corridor that runs from Greenwich to Norwalk and beyond, has warily watched the push for state action on carried interest as a way to build support for federal reforms.

“I understand where it’s coming from,” Tong said. “There are legitimate questions that people in this chamber are asking about income inequality and fairness, and those are all important issues to address. That being said, it’s 20 percent of our state’s economy.”

Tong, with McGee, is the co-chairman of the Commission on Economic Competitiveness, a panel created by the General Assembly to explore ways of growing an economy that has not yet fully rebounded from the recession of 2008.

The state needs to retain and grow the financial services industry or face the loss of tax revenues that would increase pressure to cut vital state services, not reduce it, Tong said.

“We have to think long and hard about our long-term financial competiveness, and this is a big part of the answer,” Tong said. “It is a key answer to Connecticut’s economic future. That is a fact.”

Farrell of the Working Families says the coalition will continue to press for tax reforms central to addressing economic inequality in Connecticut and nationally.

“There just has been such a resistance to asking for help from the people who can afford it the most in a state where there’s lots and lots of wealth,” Farrell said.

Farrell said the coalition is trying to capitalize on a populist message sounded by Trump from the right and Sanders from the left in the 2016 presidential campaign.

“Donald Trump, for all the nightmare that he is, is a populist,” she said. “He campaigned on fixing a broken system where the rich have too much power.”

The report attempts to tap into the vein of discontent that propelled Trump to the White House.

“This is something that reflects an understanding of the way our politics and our economy works, that people are really frustrated with,” she said. “We have to talk about where the wealth is and how unjustifiable it is that we can’t ask them to do a little bit more.”

Has she given up on Trump delivering on his promise to eliminate the federal carried interest break?

“Yeah, I think so. He surrounded himself with Wall Street guys in his cabinet,” Farrell said. “He seems to keep his promises on everything else.”