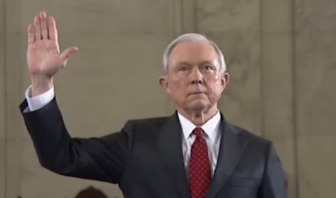 Sen. Jeff Sessions takes the oath before testifying at his confirmation hearing.

For about 24 hours, Senate Democrats – including Connecticut Sens. Richard Blumenthal and Chris Murphy –  took to the floor to argue that Sessions, an Alabama Republican, could not be counted upon to safeguard the rights of women, black Americans and other minorities, nor could he be trusted to prosecute Trump or his administration if it ran afoul of the law.

“Senator Sessions cannot be trusted …to defend the rule of law, to be a champion of civil rights and civil liberties, not just follow the law but to lead in this challenge that faces this country as never before because our rights and liberties are now threatened as never before,” Blumenthal said.

Despite the strong Democratic opposition, Sessions was confirmed on a near-party-line vote of 52-47.

The bitterness between the two parties came to a head Tuesday night when Senate Republicans voted to silence Sen. Elizabeth Warren, D-Mass., as she tried to read a 1986 letter from Coretta Scott King. The letter condemned Sessions “for using the awesome power of his office to chill the free exercise of the vote by black leaders” while serving as U.S. attorney in Alabama.

Murphy, speaking just before dawn on the Senate floor, said he felt “deep, deep disappointment” at the censoring of Warren, who was accused of breaking a Senate rule that barred speaking ill of a colleague.

“I want to put this in the context of the moment that we are living in,” Murphy said. “We have a president of the United States today who is a bully, who is using his office to try to stifle and quell debate. If you dare oppose him, frankly, whether you’re a Republican or Democrat, you are going to be called names, you are going to be mocked in an effort to try to silence you.”

Murphy was also critical of Sessions record on civil rights and  immigration. “In 2007, Senator Sessions referred to a comprehensive immigration bill as terrorist assistance,” Murphy said.

While Democrats have been opposing most of Trump’s nominees, they have been unable to defeat a single one.

The closest they came to derailing a nominee occurred during a Senate vote Tuesday to confirm Betsy DeVos as secretary of education. With two Republicans opposing Trump’s choice, the vote was 50-50, requiring Vice President Mike Pence to cast a historic tie-breaking vote.