Worried Betsy DeVos could ‘destroy’ public education? Here’s what you should know 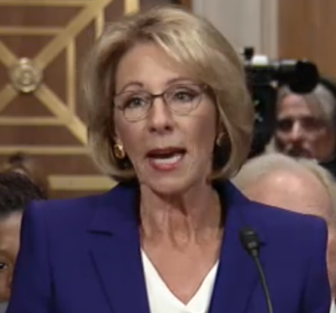 Betsy DeVos earned more opposition than any of President Trump’s cabinet picks — and any nominee for education secretary in history.

During that historically divisive process, her critics charged that DeVos wanted to “destroy” public education. Is that charge legitimate or overblown? Now that DeVos has been confirmed, here’s what you should read to start getting a handle on the possibilities.

DeVos has been among the most powerful advocates of vouchers, which which allow students to use public funds to pay for tuition at private schools, and she has also said her motivation to improve education relates to her desire to “advance God’s kingdom.”

Her opponents argue that vouchers drain support from the public schools that serve the vast majority of the nation’s students, including those students with the highest needs, and that DeVos’s approach skirts too closely to the separation of church and state enshrined in the constitution. They fear DeVos could end public education by diverting all taxpayer dollars to private schools, including religious schools.

DeVos has said she won’t impose voucher programs — and she can’t, because such programs are up to states to create. Willing state legislatures could seize the moment to grow voucher programs. But a more sweeping impact could come from a policy that DeVos’s lobbying group promoted — a tax-credit program that allows families to donate to private school scholarship funds for their children to use. That approach is already in place in 17 states.

NPR explains why this approach is likely to appeal to DeVos, and how it could work:

It unites three broad concepts that DeVos is friendly toward: 1) Privatization 2) religious education and 3) a hands-off approach to accountability for private schools. …

The tax-credit structure is especially significant when considering what could happen under DeVos in the Trump administration, because it could be a way to promote school choice on a federal level without writing big checks. “There isn’t that much money that is fungible from the federal education budget,” points out Samuel Abrams, an expert in education policy at Teachers College, Columbia University.

Broad support for tuition tax-credits would open up a new frontier in education policy-making, according to Michael Petrilli, president of the Thomas B. Fordham Institute, which supports vouchers. Someone would have to decide whether private schools that receive vouchers are held accountable for student performance and how poor students must be to qualify.

Under Obama, the Education Department stepped up enforcement of civil rights policies and issued guidance on issues affecting transgender students. Civil rights groups are concerned the Trump administration will scale back the Office of Civil Rights, especially given Trump’s apparently limited appetite for protecting or prioritizing marginalized groups.

The Atlantic convened several advocates with an eye on the office to understand what its future could look like under Trump and DeVos. While they had varying opinions about the role of the office under Obama, there was consensus that the Office of Civil Rights will be what DeVos makes of it. Said a leading advocate for transgender students, whom the Obama administration moved to safeguard:

OCR’s mission will not change. How effective it is in carrying out that mission will depend in large part on the resources provided by Congress and the leadership provided by the president and his appointees.

Fear: She’s going to change or dismantle the Individuals with Disabilities Education Act.

IDEA is the bedrock federal law that guarantees disabled students access to an appropriate public education. So when DeVos said during her confirmation hearing that its enforcement should be left up to states — a claim that she said was made out of confusion — advocates worried that she might not be committed to protecting the rights of students with disabilities.

Since then, DeVos has tried to tamp down the perception that her lack of knowledge about the law means she doesn’t support it. And more important, ignoring the law would invite immediate lawsuits, and altering it would require congressional action by lawmakers whose constituencies all include families of students with disabilities.

The biggest possibility for change: DeVos-supported programs could allow more students to opt out of the protections that IDEA offers. She’s a fan of state voucher programs directed at students with disabilities, which can require parents to waive their children’s rights under that law.

One mother, Bernadette Kerrigan, laid out the trade-off of sending her child to private school using one such voucher in Education Week:

Kerrigan also had to come up with another $18,000 that year to cover tuition costs that the $5,000 part-year voucher did not meet.

Kerrigan said she is grateful for the money. Emma, who will start 6th grade in the fall, is thriving at her new school. The family expects to receive a larger voucher in future years, but it will still cover only a fraction of the school’s $23,000 tuition.

But giving up the civil rights afforded to public school students under the special education law is a sacrifice, Kerrigan said.

The idea that poor students cost more to educate, and thus should be entitled to additional funding, has been enshrined in federal law for more than half a century, and “Title I” funds pump more than $14 billion a year into the nation’s schools. Until now, the funds have always flowed to schools, under the premise that schools with many poor students have steeper challenges than schools with few poor students.

But DeVos told Sen. Al Franken that she would prefer a system that assigns the funds to students, not schools. Vox’s explainer on Trump’s school choice proposal summarizes the policy’s appeal to Republicans:

Republicans have long wanted to turn this program into a voucher. Instead of money going to schools based on the composition of their student body, Title I would “follow the child.” Every disadvantaged student a school enrolled would come with a small pile of federal cash to help pay for his or her education. And schools would get the money whether they were public, private, or charter.

This idea, known as “Title I portability” in education circles, is by now a mainstream Republican policy proposal. Ronald Reagan called for turning Title I into vouchers during his presidency. Mitt Romney wanted to turn both Title I and special education funding into vouchers during his 2012 presidential run. Sen. Lamar Alexander, the Tennessee Republican who chairs the Senate education committee, introduced a budget amendment to turn Title I into a voucher that could be used at private, public, or charter schools in 2013.

Congress would have to approve changes to Title I rules, and local school advocates are unlikely to get behind portability in large numbers. But if there were ever a moment for such a change to be possible, it’s now.