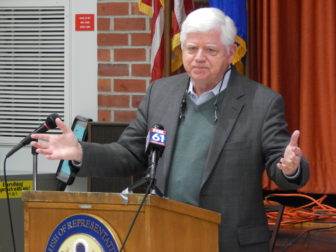 BERLIN — For the first time in his life, Michael Cisar feels getting involved in politics is a necessity.

Cisar, a Newington resident who works in the insurance industry, was the first of about 100 people who showed up at the Berlin Senior Center Saturday morning for a health care forum and town hall organized by U.S. Rep. John Larson, D-1st District.

Even though Connecticut’s entire congressional delegation is blue, Cisar said, making sure representatives like Larson are “blue enough” in the fight against President Donald J. Trump and the Republican-controlled U.S. Congress is a top priority.

Part of that opposition is doing everything possible to prevent Republicans from dismantling the Affordable Care Act, Cisar said.

Larson organized the forum as part of a national effort by congressional Democrats to hold town hall-style meetings on Saturday, which is the start of a week-long congressional recess. Democrats are hoping these events will showcase the importance of the Affordable Care Act and demonstrate significant opposition to repealing it.

At least 80 of the 193 members of the House Democratic Caucus had scheduled events for this weekend, including Larson and U.S. Reps. Joe Courtney, D-2nd District, and Rosa DeLauro, D-3rd District.

U.S. Rep. Jim Himes, D-4th District, did not schedule a town hall for Saturday, but is expected to have two during the coming week. U.S. Rep. Elizabeth Esty, D-5th District, does not have any events scheduled.

Many Republicans have been greeted by raucous crowds at their town halls in recent weeks, but Larson’s was more subdued. Larson and Courtney both held town halls with Q-and-A sessions while DeLauro met with a handful of constituents at a restaurant in New Haven.

Larson said the Affordable Care Act is not perfect, but the Republicans have not presented any meaningful plan to replace it. An outline of a replacement released earlier this week is not sufficient, Larson said.

“We would be more than happy to join with our colleagues to strengthen the Affordable Care Act, to improve it, to make it more affordable, more accessible, more available,” Larson said. “But we will not abandon that and give tax cuts to people at the top and have it paid for on the backs of the general public.”

“Could we improve the act? You bet we can. But we should be working bipartisanly, together,” Larson added later.

Larson’s event included an hour-long panel discussion on the effects of repealing the Affordable Care Act. His staff also showed a recent ad from a right-leaning advocacy group that asked viewers to imagine a better health care system.

“House Republicans have a plan to get there,” the voiceover in the ad said.

Some members of the crowd responded with laughter. 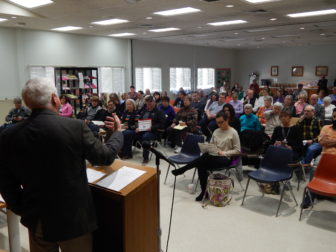 About 100 people showed up for Larson’s event.

About one-fifth of the people in the room had the opportunity to ask questions and share stories about how the Affordable Care Act has affected them. Nearly every speaker had a favorable opinion of the law, though some expressed concerns about its flaws.

Dorothy Thompson, a Manchester resident, said while she didn’t think the Affordable Care Act did enough to make coverage affordable for small business, the law has had a positive effect overall.

But now her concerns are squarely on the Republicans’ still-developing plan to replace the Affordable Care Act. She said if people were concerned about some provisions of the existing law looking like death panels, they should be even more concerned about the “high-risk pools” Republicans are considering.

“That sounds like a death panel to me,” Thompson said.

The most vocal opponent of the Affordable Care Act during the forum was Steve Hunt, an independent insurance agent from Avon. Hunt grilled Larson both during the forum and for about 30 minutes afterward on the Democrats’ failure to put forth specific proposals to fix the legislation.

Larson told Hunt the blame for failing to make adjustments falls on the Republicans, who he said have blocked anything short of a full repeal of the legislation since they took control of the House in the 2010 elections.

The audience applauded several times when Larson spoke during the lengthy back-and-forth. 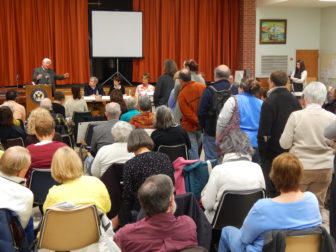 Larson answers a question while many others wait in line to ask theirs.

While some people spent time discussing health care, a significant number veered from the subject to press Larson on his efforts to oppose Trump and the Republicans.

“Is there a plan for the Democratic caucus to use procedural slowdowns that were used against the Obama administration for the last eight years?” asked Jessica Muirhead, a Manchester resident who is an organizer in the Women’s March movement.

Larson said while the House has fewer procedural options than the Senate, the House Democratic caucus “will be doing everything that it can, and be going right after our colleagues on the other side.”

Barbara Bellonio, a retired Southington resident, interjected during the Q-and-A to tell Larson she wants Democrats to “set the agenda” rather than play defense against whichever issue the Republicans bring up next. That includes, she said, pushing “Medicare for all” as a replacement to the Affordable Care Act.

Several people in the room applauded in response. Larson said he supports the idea.

Bellonio and Cisar, who both supported Bernie Sanders during the Democratic presidential primary last year, said they want to see Larson take a stronger stance for progressive causes. Cisar even went as far as to say Larson should face a primary challenger in 2018 if he isn’t doing everything in his power to block the Republican agenda.

Larson faced a number of questions about what actions individuals could take to combat that agenda, especially in a state that already has a fully Democratic congressional delegation. He said showing up at rallies, marches and forums sends a strong message.

Jim Iacobellis, senior vice president of government and regulatory affairs for the Connecticut Hospital Association and one of the panelists, added that people should contact any friends and family in other states to urge them to get involved.

“I have three sisters,” Iacobellis said. “One lives in Indiana – Indiana’s not Connecticut – and I’ve encouraged her, pick up the phone, make a phone call, attend a rally, call your congressman.”

Larson drew some criticism both during and after the forum, however, because it is his only planned event in Connecticut during the congressional recess. 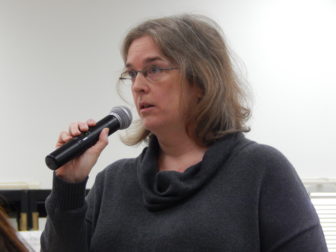 Kelly Vaillancourt expressed her disappointment with Larson’s decision to hold only one town hall during the congressional recess.

Kelly Vaillancourt, a software developer from West Hartford, expressed her disappointment with Larson’s decision to hold only one town hall, and a single-issue one at that, she said.

Muirhead said members of her chapter of the Women’s March felt a similar disappointment.

“We were a little bit disappointed that there weren’t more meetings (scheduled) during the recess,” Muirhead said. “But we do recognize that he holds more town halls in general. We’ll definitely be looking forward to the next ones. I think one of the things we would like to see is a more general town hall.”

Larson said he has already held eight public events since the start of the year.

He said he will be spending much of the recess in Texas, where he plans to visit a Lockheed Martin facility involved in the production the F-35, which he called the “backbone and heart” of the manufacturing base in Connecticut. He said Trump is threatening its production.

He also said he will participate in a forum on Social Security, which he said gives him the opportunity to push the Democrats’ message of protecting the social safety net in a red state like Texas.