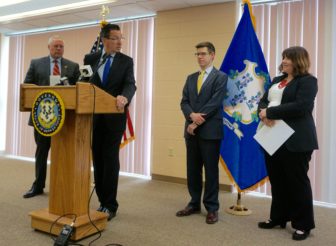 East Lyme — Gov. Dannel P. Malloy stepped to a microphone in a prison waiting room to talk about bail reform Thursday. He glanced at two unlikely allies, David McGuire of the American Civil Liberties Union and Suzanne Bates of the Yankee Institute for Public Policy, a conservative think tank.

“This is not a mistake. We have all ends of the spectrum, the political spectrum, that are represented here. I think Yankee Institute is only allowed to say one nice thing about me a year,” Malloy said, prompting laughter. “They don’t get pictured very often side by side, but to both of you, thank you for being here.”

The common ground for the ACLU of Connecticut, Yankee Institute and the Malloy administration is support for the governor’s second try in consecutive years to ensure that no one is jailed awaiting trial on a misdemeanor charge simply because they are poor. The administration estimates that about 300 persons are held on any given day on relatively low bail.

“No one should be sitting behind bars simply because they are poor,” Malloy said.

Malloy spoke at York Correctional, where about 300 of the 1,000 women incarcerated in the state’s only prison for women are being held as they await either trial or sentencing, unable to make bail. One woman whose file Malloy said he reviewed has been held since August on a bond of $7,500, meaning she was unable to afford either the bail or a bond agent’s fee.

Malloy’s legislation would bar judges from setting money bail for defendants charged with most misdemeanors, although judges would retain discretion to set bail for defendants who had previously failed to appear in court or were judged a risk to others.

The bill would provide every defendant, unless a judge determines they are a flight or safety risk, with the opportunity to be released by making a cash deposit of 10 percent of the bail set. Unlike the fee paid to a bond agent, the deposit would be refunded if the defendant met his or her court obligations.

It would prohibit judges from setting cash-only bonds, typically a way for judges to effectively deny bail, since the amounts usually are unaffordable and the defendant is not allowed to use a bond agent

“When people don’t pose a risk to their community, there is a real cost to keeping them in simply because they cannot post bail, both a human cost and a financial cost,” said Bates, the policy director for the Yankee Institute.

“There are people in Connecticut sitting in jail because they have no money in their pocket,” said McGuire, the executive director of the ACLU of Connecticut. “Make no mistake, there are real racial inequities at play here.”

About 14 percent of defendants taken into custody by police are held on some type of financial bond until their case has a verdict, according to a recent study by the Connecticut Sentencing Commission. The number held solely because of inability to afford a modest bail is a matter of debate.

The commission warned it “cannot conclusively answer whether any persons in Connecticut remain in detention solely because they cannot raise monetary bail, and if so, how many. The available data is, however, consistent with the possibility that this does occur.”

The panel has recommended changes similar to ones proposed by Malloy, but it also concluded, “Many elements of Connecticut’s pretrial justice system stand out as exemplary.”

Pretrial detention rates are low compared to most other states. And the state has a well-regarded Court Support Services Division, which reviews the bail of anyone not released by police after their arrest using a risk-assessment tool that considers the charge and things like criminal history, education, mental health, marital and employment status, and previous failure to appear in court to set appropriate levels of bail.

The Bail Association of Connecticut has withheld judgment on Malloy’s proposals, while questioning the need for extensive changes to what they say is a system that works well.

Malloy welcomed the support of the sentencing commission, whose members include judges, prosecutors, defense lawyers and police, but he took issue Thursday with the suggestion that the bail system is “exemplary.”

“I respectfully disagree with respect to giving ourselves an A. I don’t give ourselves an A,” Malloy said. “Are we better than some states? Yes. Are we as good as we should be? The answer is no when it comes to bail.”