The tribes running the state’s two casinos will announce within days where they want to build a satellite gaming facility in north-central Connecticut, casino leaders announced Thursday.

Executives from Foxwoods Resort Casino and the Mohegan Sun casino visited the Legislative Office Building on Thursday to make a final pitch to the Public Safety Committee before that announcement.

And while Felix Rappaport, Foxwoods president and chief executive officer, and Mohegan Tribal Chairman Kevin P. Brown, stressed their plan’s potential to save thousands of jobs, committee members offered mixed reactions to the idea of a third casino in Connecticut.

“We’re days — not weeks or months — from announcing a decision,” Brown told reporters minutes before testifying before the committee.

Following a process set up by the legislature in 2015, the Mashantucket Pequots — who run Foxwoods — and the Mohegans, are planning a new facility to blunt the anticipated loss of business tied to ongoing development of MGM Resorts International’s $950 million casino and entertainment center in Springfield, Mass.

Brown said two communities still remain under consideration. The plan could not proceed unless approved by the General Assembly and by the local community. Brown added that one of the municipalities under consideration would require a referendum to decide whether to site the casino. The second would need the approval only of the local legislative body.

An analysis prepared for the tribes by gaming consultant Clyde Barrow estimates that the MGM facility — which is more than halfway complete and expected to open in 2018 — would cause the loss of 9,300 jobs and $702 million in revenue to Connecticut’s casinos during its first three years of operation.

Barrow’s projections are that a satellite facility would recapture 46 percent of the jobs and 53 percent of the revenue the Connecticut industry otherwise would lose. The tribes also say the new casino would create almost 4,300 new permanent jobs — either at the casino or at surrounding related businesses — and 2,300 temporary construction jobs.

“Over the last decade, Connecticut and our industry has stood still in the face of competition from Rhode Island and New York,” Brown said. This has cost both Connecticut casinos thousands of jobs and has cost state government tens of millions in casino revenues.

“It’s really all about the economic health of the state that we all love,” he said.

Unlike the two southeastern Connecticut casinos — which are larger complexes with entertainment venues, convention centers, hotels, retail outlets and other attractions — the satellite facility would be a smaller operation, costing about $300 million and offering just gambling and food. 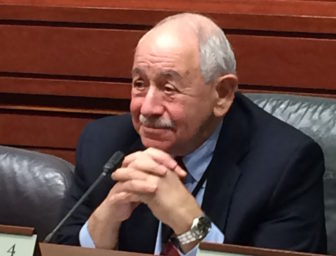 Some lawmakers said Thursday Connecticut should have moved sooner to shore up its gaming industry against rising competition in neighboring states.

“We should be in the ground and talking about where you’re sending the money,” said Sen. Tim Larson of East Hartford, the Senate Democratic chairman of the Public Safety Committee.

Larson praised the two southeastern Connecticut casinos for pledging to use union labor to build the new facility.

Connecticut provided financial incentives in recent years to preserve jobs at Pratt and Whitney, Sikorsky and Electric Boat, Larson said, adding that the casinos are another major employer. “We’re on the comeback and I think we have to stop being down in the mouth” about the gaming industry.

“In this building, things take forever,” Cassano said. “In the meantime they are more than halfway done in Springfield. I’m wondering if we’re going to miss the boat?”

But others questioned whether Connecticut should rethink its relationship with gaming.

“How do we know that Connecticut is getting the best deal possible for the state of Connecticut?” asked Sen. Kevin Witkos, R-Canton.

The state entered into a compact with the Mashantucket Pequot tribe 25 years ago, shortly after Foxwoods opened. Connecticut essentially dropped its legal objections to the addition of video slot games to the casino in return for 25 percent of the annual revenues from these slots.

Connecticut’s take, which peaked at $430 million per year, has been on the decline since then. It is projected to be $267 million both this fiscal year and next, but then fall below $200 million by 2019.

Rep. Daniel Rovero, D-Killingly, said for years he thought that deal was “terrific” until he learned that Massachusetts would receive 25 percent of all gaming revenue from the new MGM facility. Video slots represent about 18 percent of gaming receipts at the two southeastern Connecticut casinos.

Brown said the tribes would not renegotiate their existing compact with the state. But they would develop a new revenue-sharing agreement involving the third casino alone, and that deal probably would involve all gaming receipts.

“You short-changed the people in the state of Connecticut as far as I’m concerned,” Rovero said.

An MGM representative warned Connecticut legislators Thursday not to underestimate the value of allowing a third casino in the state.

“It is a very valued, privileged license” to operate another casino in the state,” said Uri Clinton, senior vice president and general counsel for MGM.

For example, he said, MGM is paying $25 million per year just to the city of Springfield to host a new casino, Clinton said.

“The more you talk, the worse I feel,” Rovero told Clinton, adding that he keeps wondering  “how much money did Connecticut leave on the table” through its existing compact?

MGM and the Schaghticoke Tribal Nation in Connecticut both have filed lawsuits challenging the legislature’s authority to grant the Mashantucket Pequots and Mohegans an exclusive right to pursue development of a casino in Greater Hartford.

Foxwoods and Mohegan Sun are located on sovereign tribal land, but the third casino technically would be the first in Connecticut off tribal land.

MGM believes the best location for a third casino in Connecticut would be the southwestern corner near New York, Clinton said.

The Schaghticoke tribe released a study Thursday that estimates the southwestern Connecticut gaming market is worth $3.8 billion per year.

The study commissioned by the tribe and prepared by Strategic Market Advisors of Portsmouth, N.H., also shows that the Greater Hartford area market is worth less than $1 billion.

“This economic impact study clearly shows the tremendous value and potential for a third casino in Southwestern Connecticut,” Tribal Chief Richard Velky wrote in a statement. “ … A casino in southwestern Connecticut would create thousands of jobs where they are needed the most and would offer a high-quality gaming operation within the proximity of a much more populated area.”

Thursday’s forum was open only to groups invited by the committee to testify. 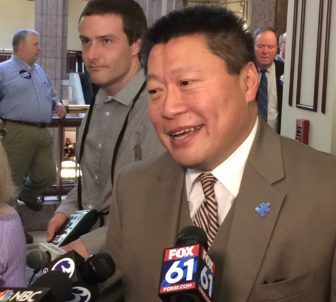 Sen. Tony Hwang, R-Fairfield, one of the legislature’s most ardent opponents of legalized gambling, said before Thursday’s hearing that lawmakers should recognize the Northeast is oversaturated with gambling and Connecticut residents don’t want any expansion of the industry.

He cited a March 2015 poll by Quinnipiac University that found about 75 percent of residents oppose any new casinos here.

“How are we not letting the public be heard on this?” Hwang said, adding Connecticut also has a poor history of studying the full effects of gambling.

“We, as a state, have not fully done the analysis of the societal impact,” he said. “We pick up the pieces of broken lives.”