Blumenthal in New Britain: ‘We are in the fight of our lives’ 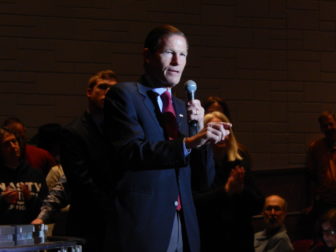 New Britain — If there were any supporters of President Donald J. Trump at the town halls held across Connecticut over the last week, they were drowned out by cheering crowds that urged the state’s congressional delegation to resist the policies of the Republican majority and push an agenda of progressivism in the face of seemingly insurmountable opposition.

Sunday’s town hall – which was the final one scheduled during a week-long congressional recess – felt more like a rally at times. Blumenthal said the turnout, despite being in a state with a completely Democratic congressional delegation, sends a clear message to him and other lawmakers in Washington, D.C.

“The choir needs preaching to,” Blumenthal told the crowd.

Blumenthal’s assessment of what is at stake was grim. The reality is, he said, that as the minority party, Democrats only have a handful of options to delay the lawmaking process.

“We are in the fight of our lives,” Blumenthal said. Members of the audience nodded in response.

With each declaration, the audience responded with cheers and applause.

During the event, Blumenthal fielded questions and concerns about a litany of issues, including health care, immigration, education funding, the Supreme Court vacancy, Russian interference in the election, freedom of the press, care for veterans, infrastructure and net neutrality.

The crowd remained energized from start to finish. Even after nearly two hours and more than two-dozen questions, hundreds still remained in the auditorium, and cheered as questioners pressed Blumenthal to renew his commitments to fight for a single-payer health care system, to bring an end to what some called a “corporatized” Democratic Party and to challenge Trump at every turn.

While some in the auditorium said they were long-time political activists, others said the election of Trump spurred them to take action. 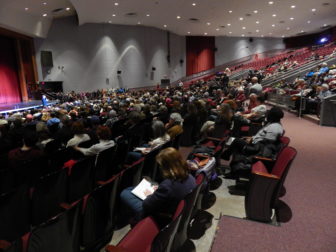 Laurie McFadden, a 59-year-old Middletown resident, said she thought her days as an activist were long behind her. Trump changed that, she said, which is why she made a point of attending Blumenthal’s town hall as well as Larson’s last weekend. She said his actions and policies – from planned cuts to health care services to immigration raids – are attacks on democracy.

“It sickens me,” McFadden said. “The whole thing sickens me.”

Maureen Roberts, a 72-year-old Windsor resident, said she got in line at 10:15 a.m. After not being able to get through the door at Murphy’s town hall in West Hartford on Tuesday, she said, she was not going to miss her chance to see Blumenthal.

“I’m angry,” Roberts said. “That man that is in the White House, who works for me, is giving me the finger every way he can think of.”

Roberts did not come alone. She was joined by Maggie Menard, 69, of East Hartford and Elizabeth Karhu, 66, of Manchester, who said they feel the same way, and wanted the opportunity to show their opposition to Trump’s agenda.

That opposition, they said, is a genuine grassroots movement – despite Trump and other critics claiming otherwise.

“People are angry, and they want to do something about it,” Roberts said.

Trump at center of concerns

With nearly every question came a different concern about the Trump administration.

Some said they fear losing their health insurance. Others said they have concerns about the future of public schools. Many expressed disbelief and shock with what they characterized as an all-out attack on the free press. 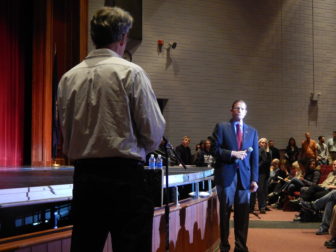 Blumenthal listens to a questioner during his town hall in New Britain.

Then Blumenthal pivoted back to the present day.

“The road to dictatorship has to be blocked,” Blumenthal said as the audience applauded.

Blumenthal continued: “I’m not saying Donald Trump wants to be a dictator. I’m not—”

Dozens in the audience shouted back: “We are!”

“Well, we need to stand strong to make sure it doesn’t happen here. We need to be sure that we protect our democracy. That’s why we’re here today,” Blumenthal said.

After the event ended, Blumenthal again clarified that he does not believe Trump is comparable to Hitler, but said Trump poses “a threat to basic rights and liberties,” including to the free press and the court system.

Many of the questioners pressed Blumenthal for ways they could take action against the Trump administration beyond just organizing for the 2018 and 2020 elections, but he had few answers for them.

“I sympathize with the desire to do more because I feel it,” Blumenthal told reporters. “And I am trying to feel my way to constructive avenues of engagement and involvement.”

The desire for action might have been displayed best when Blumenthal was discussing when and how to engage the Republican majority.

“We need to pick our battles,” Blumenthal said.

Numerous members of the crowd shouted back: “Resist!”

“And yet, there are so many battles to fight,” Blumenthal said.

A handful of questioners pushed Blumenthal on the issue of trying to impeach Trump, though one said he understood Democrats did not have the votes to do that. On multiple occasions, a small number of audience members responded to Blumenthal’s statements with the refrain: “Impeach!”

“A lot of ugly ideas have been normalized in recent months,” said Peter Craig, a veteran who lives in New Britain. “That’s why I would ask your help, Senator, in normalizing a couple of other words, which other people have brought up, which are ‘impeachment’ and ‘treason.’”

Many in the audience applauded, but Blumenthal moved onto the next questioner without responding.

A number of speakers also addressed the state of the Democratic Party, with emotions ranging from disappointment to anger.

Some of that anger came from the result of Saturday’s DNC chair election.

While Perez named Ellison as deputy DNC chair shortly after the election, many were not satisfied with the party’s decision and pressed Blumenthal on the issue. 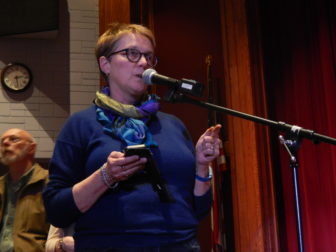 Janet Reynolds of Canton said the Democratic Party needs to be more progressive.

Janet Reynolds, a 62-year-old Canton resident, told Blumenthal if the Democratic Party does not change direction soon, she may be ready to leave for a third-party – preferably a new one.

“I’ve been a lifelong Democrat, and right now I’m wavering,” Reynolds said. “I’m waiting to see what is going to happen. Yesterday’s chair election was not one that I thought suggested that we were going to move to a level of progressiveness that I think is needed in this country to really affect change.”

Much of the audience cheered.

Reynolds said Sanders showed “radical change” is possible, and now is the time to make adjustments to the party’s message in light of the threat Trump poses.

“The winds of fascism are blowing,” Reynolds said.

Blumenthal said the Democratic Party needs to learn from Sanders’ success in the primary, which drew applause.

The issue of superdelegates to the Democratic National Convention also came up during the questioning period. Blumenthal was one of Connecticut’s superdelegates in 2016.

Nancy Burton, 67, of Barkhamsted, pressed Blumenthal on why he did not come out in opposition to the superdelegate system.

“The behavior of the DNC during the primaries was pretty despicable,” Burton said. “I also know that you and every single superdelegate in this state were committed to Hillary Clinton before the primary even happened in this state.”

Blumenthal said he was willing to push for “changes” to help make the voting system “more reflective” of the popular vote, but did not specify what he would advocate for specifically.

“We’ve had too much from the top down,” Blumenthal said. “We need to rebuild from the bottom up.”

Of the more than two-dozen speakers who addressed Blumenthal, none of them identified themselves as being Republican, conservative or a supporter of Trump.

This proved to be a common theme across many of the town halls that took place in Connecticut during the congressional recess.

In his Berlin forum last weekend, Larson said the atmosphere stood in stark contrast to town halls he held in 2009, when Tea Partiers and Republicans packed town halls held by Democratic congressmen. They were there to voice their opposition to President Barack Obama’s health care reform efforts.

There was one self-identified Republican out of the 20 people who asked questions at Larson’s event.

But just because people are not identifying themselves as Republicans does not mean they aren’t the ones asking some of the questions, Blumenthal said.

“I think Republicans are reflected in these rallies as well as Democrats,” Blumenthal said. “I talked to Republicans who were equally fearful about the potential threats to rights and liberties.”

“There’s nothing partisan about the United States Constitution,” Blumenthal added.