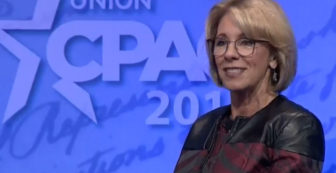 If Education Secretary Betsy DeVos opposed rolling back protections for transgender students behind the scenes, she wasn’t letting it show last week when she spoke to many of the country’s staunchest conservatives.

“This issue was a very huge example of the Obama administration’s overreach, to suggest a one-size-fits-all, federal government approach, top-down approach, to issues that are best dealt with and solved at a personal level and a local level,” DeVos said.

“I have made clear from the moment I have been in this job that it’s our job to protect students and to do that to the fullest extent that we can,” she continued. “And also to provide students, parents, and teachers with more flexibility around how education is delivered and how education is experienced, and to protect and preserve personal freedoms.”

The remarks, which DeVos made at the Conservative Political Action Conference in Maryland, came the day after Trump administration officials rescinded federal guidance instructing schools to allow transgender students to use bathrooms of their choice. The New York Times reported that DeVos — who faced tough questions in her confirmation hearing about her support for gay rights — had opposed the changes, but lost a power struggle with Attorney General Jeff Sessions and President Donald Trump.

DeVos’s statement about the changes on Wednesday emphasized that she was committed to “protecting all students, including LGBTQ students.” States, districts, and schools that have established their own protections for transgender students will be able to continue to enforce those.

But some see the changes as an unnecessary blow to students vulnerable to bullying and whose rights to spaces like bathrooms aren’t specifically protected in many parts of the country.

“Supports for transgender students in K-12 schools change and save lives, and hurt no one,” Dr. Eliza Byard, the head of GLSEN, an advocacy group focused on the rights of gay students in schools, said in a statement.

This article was originally posted on Chalkbeat by Sarah Darville on February 23, 2017. Chalkbeat is a nonprofit news site covering educational change in public schools.