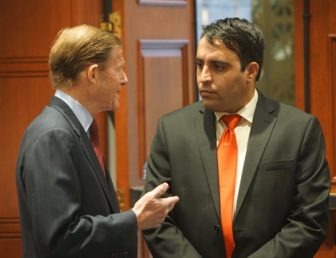 Washington – Connecticut lawmakers have joined other Democratic colleagues in inviting guests to President Donald Trump’s first address to Congress Tuesday — people who will serve as symbolic rebukes to the new president’s policies.

The delegation has invited constituents with ties to Trump’s suspended “Muslim ban,” a retired school principal who enthusiastically supports public schools, a hospital administrator concerned about the repeal of the Affordable Care Act and a  police chief who supports gun control.

Rep. Rosa DeLauro, D-3rd District, for instance, has invited Fadi Kassar, a Syrian native who was caught up in Trump’s executive order that barred immigration from seven Muslim majority countries in the Middle East.

Because of that ban, which has been blocked by a federal court, Kassar’s wife and children were temporarily detained at customs in New York.

Last week, a group of liberal lawmakers circulated a letter on Capitol Hill urging Democrats to “bring guests who have made a ‘positive impact’ on their communities despite discrimination or marginalization.”

“It is our hope that their presence in the House Gallery will remind President Trump that he is not the arbiter of patriotism,” the letter said. “This country belongs to all of us, and his rhetoric of intolerance will not stand.”

The U.S. Constitution requires a president to “from time to time give to the Congress information of the State of the Union, and recommend to their consideration such measures as he shall judge necessary and expedient.”

Traditionally the president should be in office for a year before he gives his first State of the Union address, using the opportunity to seek support from Congress on a legislative agenda.

Since Trump has been in office for a little more than a month, his speech Tuesday night is being called an address to a joint session of  Congress, not a SOTU.

A memo distributed by the White House on Monday indicated Trump will speak of  an “optimistic vision”  of the nation “that crosses the traditional lines of party, race and socioeconomic status.”

In bullets, the memo indicated Trump would promote a “bold agenda” on tax and regulatory overhauls, reforms in the workplace and a promise to “save American families from the disaster of Obamacare.”

“Americans can expect a speech that is grounded firmly in solving real problems for real people,” the memo said. “How can we make sure that every American who needs a good job can get one? How can we get kids who are trapped in failing schools into a better school? How we can keep gangs and drugs and violent crime out of their neighborhoods?”

The president is also expected to urge Congress to approve a massive boost in defense spending.

While Trump’s speech is expected to elicit a strong political push-back from Democrats, this is not the first time Connecticut lawmakers are bringing guests to a presidential address to make a point.

After the shootings in Newtown, several legislators invited family members of the victims of Sandy Hook Elementary School to press for the need for federal gun control.

Sen Richard  Blumenthal’s guest will be Hewad Hemat, s security guard at the University of New Haven and a former interpreter for the U.S. Army in southeast Afghanistan.

“He is the face and the voice that I want my colleagues to see as evidence of why a Muslim ban does huge damage to our nation and why it is a betrayal of American values and American promises,” Blumenthal said at a press conference in Hartford on Monday.

Beginning in 2011, Hemat helped run a media outreach project involving 15 radio stations in southeast Afghanistan. It was intended to counter anti-U.S. campaigning by the Taliban. 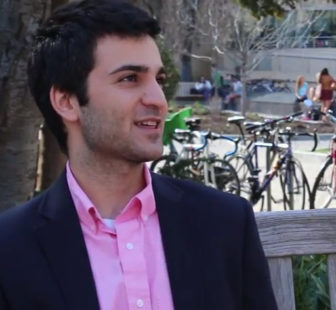 “Marwan’s inspiring story is the result of his bravery and hard work and the generosity of spirit of those who reached out a hand of hope across the ocean,” Himes said. “If President Trump’s proposed policies on immigration and refugees were in place at the time, however, this bright young man would have been denied access to our country and had a very different future.”

The guest of Rep. Joe Courtney, D-2nd  District, will be Valerie Nelson, a longtime principal of the Charles Barnum Elementary School in Groton who retired in June of 2015.

“At a time when many government leaders are now openly questioning the value of public education, Val Nelson’s incredible success leading the Charles Barnum School in Groton stands as a towering example of public education as its best,” Courtney said.

Trump  Secretary of Education Betsy DeVos is a champion of charter and school vouchers and many public school advocates fear she will steer federal funding toward those efforts and away from public schools.

Sen. Chris Murphy has invited the president of Derby’s Griffin Hospital, Patrick A. Charmel, to stress the need to keep the Affordable Care Act’s reforms to the health care system in place.

“Patrick has spent decades working to improve patient care and services for people in Connecticut, and I’m so glad he’ll be joining me tomorrow night,” Murphy said. “When I talk with people across our state, I can hear the fear in their voices that the insurance they depend on will be stripped away from them…. I’ll keep working with Connecticut leaders like Patrick to continue to advance patient care and make the practical changes we need to improve care and control costs.”

“I invited Chief Riddick as my guest not just to thank him for his many years of dedicated service, but also to send a message to my colleagues and to President Trump that working to stop our nation’s gun violence epidemic is one of the most important steps we can take to protect those who serve in law enforcement,” Esty said. “Congress and President Trump need to put the safety of our communities and our law enforcement officers before the profits of the gun lobby.”