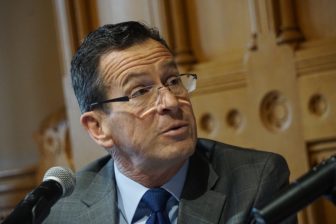 Washington – Like other Democratic governors, Dannel Malloy ended his long weekend here at the National Governors Association winter meeting pessimistic about President Donald Trump’s plan for the Affordable Care Act but hopeful the new administration will be receptive to other state needs – especially when it comes to infrastructure

Malloy, the head of the Democratic Governors Association, said he did not speak to Trump during this visit to Washington, except to “exchange greetings.”

Trump met twice with the governors attending the NGA meeting, on Sunday night at the Governor’s Ball and at another meeting at the White House Monday morning.

“We’re going to give you back a lot of the powers that have been taken away from states and great people and great governors,” Trump said to the governors Monday. “And you can control it better than the federal government because you’re right on top of it.”

But Malloy and other governors balked at House GOP plans to replace the Affordable Care Act. It would give governors more control over their state Medicaid programs, but shrink the federal payments for this federal-state health program for the poor.

“Clearly the Republicans are going to do great damage to Medicaid,” Malloy said. “And interestingly the part of the ACA they most want to change is the most cost-effective.”

“And it’s not like we have a choice. It’s not like, oh, gee, let’s hold it off. Our highways, our bridges are unsafe,” the president said.

Trump advisors have promoted a plan to fund a $1 trillion infrastructure initiative through public-private partnerships and by offering billions of dollars in tax credits to private investors.

It’s not clear how much more federal funding would be used to boost the building and repair of the nation’s roads and bridges. Right now, the federal government is the prime source of funding for interstate highways and other big transportation projects.

“There is not a meaningful plan that has been put forward on infrastructure,” Malloy said.

He also said private companies are not likely to invest in unprofitable projects needed the most, including roads and bridges in rural areas. Malloy, however, said he’d support the idea of a federal infrastructure bank, which would allow states to borrow at low interest rates, an idea Treasury Secretary Steven Mnuchin has supported.

Malloy also said he had a promising conversation with Transportation Secretary Elaine Chao over some pending grant applications.

“We’ve had a good relationship with the U.S. Department of Transportation, and I think it should continue,” Malloy said.

Trump also assured the governors that his crackdown on immigration is limited to criminal aliens, and massive deportations are not in the plans.

“That’s where our focus is – it’s the bad ones,” Trump said. “We’re getting some very, very bad players out of this country – drug lords, gang members, heads of gangs, killers, murderers – we’re getting them out. That’s what we’re focused on.”

Gov. Terry McAuliffe, D-Va., said the Trump administration has assured him privately that it will move to deport only individuals who have come into the country illegally and will allow undocumented youth who were brought into this country by their parents, and who are eligible for a program called Deferred Action for Childhood Arrivals, to stay in the United States.

DACA was created by President Obama through an executive order. While Trump last week overturned several Obama-era executive orders related to immigration, McAuliffe said both Trump and Homeland Security Secretary John Kelly assured him DACA would not be scrapped.