Before and after Trump speech, Democrats pitching for cash 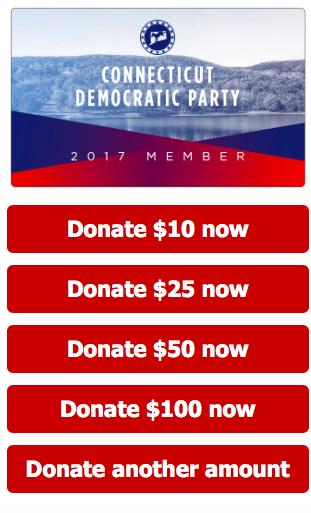 A portion of a typical political email solicitation, this one sent Tuesday by Democrats ahead of the president’s speech.

An email solicitation from Connecticut Democrats anticipated bad news Tuesday night in President Trump’s congressional address: “You can expect the GOP Congress to stay on their fee clapping as he talks about defunding Planned Parenthood, stripping away gun reforms, and repealing Obamacare.”

But if Trump’s been bad for the Democratic agenda, he’s been an earner for the party: The latest campaign finance report shows that small donations to state Democrats, most made via online appeals, produced about $22,000 of the $28,708 in individual contributions to the party’s workhorse federal account in January.

And Michael Mandell, the executive director of the party, said the February report will match or exceed the January numbers, with much of the money coming in response to Trump-related email appeals like the one sent Tuesday morning and another one that is likely to go out after the president’s televised address to a joint session of Congress.

“We’re in a position where we’re ready to move,” Mandell said. “Obviously, this year has presented more opportunities. It’s reacting to what the president is saying. Right now, it’s what do we think people care about and developing a plan for how those issues are resonating with people in Connecticut.”

The email solicitations bring more than money: They can add to the party’s list of active voters, and they give a sense of the issues that best driver voter interest.

“Certainly, a lot of our actions are centered around finding people who are interested in issues,” Mandell said. “It’s a small research project. We learn what people care about.”

Total contributions to the state Democratic Party’s federal account in January were $39,428, including nearly $11,000 in contributions from other party committees.

Connecticut Republicans are using the unpopularity of Gov. Dannel P. Malloy in much the same way, but their online donations cannot be easily tracked, as they use no central clearinghouse like ActBlue.

The state GOP reported $20,232 in total contributions to its federal account in January, half in unitemized contributions — typically donations of up to $250.

J.R. Romano, who took over in mid-2015 as the state Republican chairman, said he has been working to expand the GOP’s small donor base, using social media and other tools.

“It’s a whole new world when it comes to the online stuff,” Romano said. “They generate money talking about Trump, riling their base. We talk about Malloy.”

“We map what people are paying attention to on social media — what motivates people to share and like,” he said.

What is hot on Facebook can show up in an email solicitation, a cheap and quick way to reach donors, Romano said. The GOP chairman said he expects Democrats to make multiple attempts to raise money off Trump’s speech.

“If it doesn’t work tonight, they’ll send out a different one in the morning,” he said.

Overall, neither party had a great month for fundraising in January, which is not unusual.

The monthly reports filed to the Federal Election Commission offer a partial picture of the parties’ finances. The parties also main accounts used strictly for state and local activities, but those accounts are reported quarterly to the State Elections Enforcement Commission.