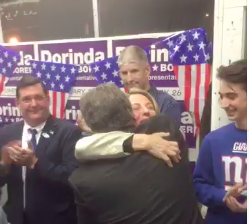 In three special elections Tuesday night, Connecticut voters did nothing to shift the balance of power in the evenly split Senate or closely divided House, despite furious efforts to make one race a referendum on President Trump and another on Gov. Dannel P. Malloy.

Democrat Dorinda Borer easily defeated Republican Edward R. Granfield in the 115th House District of West Haven to succeed Stephen D. Dargan, a Democrat who resigned to accept a post on the Board of Pardons and Paroles.

Borer’s victory only briefly restored Democrats to the 79-72 House majority they won on Nov. 8, since Rep. Douglas McCrory, D-Hartford, and Rep. Eric Berthel, R-Watertown, now will resign after winning Senate seats in the 2nd District of greater Hartford and 32nd District outside Waterbury.

With the ability of Democratic Lt. Gov. Nancy Wyman to break tie votes in the 18-18 Senate, Connecticut remains one of just a half-dozen states with a Democratic governor and state legislature. 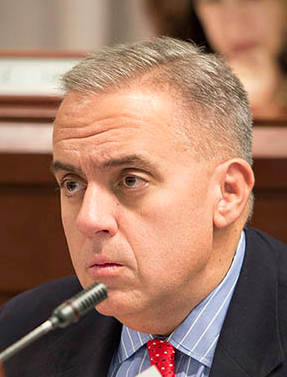 Unofficial results show McCrory winning a seat vacated by Sen. Eric Coleman, D-Bloomfield, by crushing Republican Michael McDonald in Hartford and Bloomfield. In McDonald’s hometown of Windsor, McCrory still won by about 600 votes, a disappointment to a GOP that saw McDonald as a smart, energetic candidate.

“We left it all on the field,” said McDonald, who fashioned his campaign as a referendum on the unpopular Democratic governor and his controversial proposal to close a $1.7 billion deficit. “There is nothing I would have done differently.”

Republicans had been encouraged by the manner in which McDonald qualified for public financing: He stood outside stores in the heavily Democratic district engaging voters in a conversation about Malloy, then asking for qualifying donations for public financing.

In the 32nd Senate District, Berthel won comfortably over Democrat Greg Cava of Roxbury in a race that Democratic activists worked with some success to nationalize as a referendum on Trump: In the most Republican Senate district in the state, Cava lost by 10 percentage points, which Democrats say is their best showing there in decades. 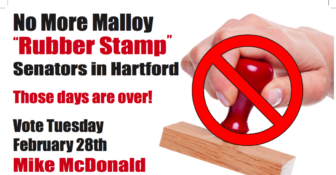 McDonald ran against Malloy in the 2nd.

Wolf PAC, a national political action committee, made more than $50,000 in independent expenditures in support of Cava, who lost the same seat by a 2-1 margin in November to Sen. Rob Kane, R-Watertown, who resigned to accept the post of Republican state auditor. Cava campaigned against Trump as much as Berthel.

After losing three Senate seats and eight House seats in November, despite Hillary Clinton’s carrying the state over Trump, Democrats were ready to celebrate the results of the special elections Tuesday as harbingers of better things to come in 2018.

“This was a resounding rejection of Donald Trump’s presidency, which is spiraling out of control,” said Geoff Luxenberg, the Democratic consultant who managed Cava’s campaign. “For this election to be that close, and for Democratic turnout to be double the 2008 special election for the same seat, speaks volumes about how frustrated people in Connecticut are with Donald Trump.”

Matt Walter of the Republican State Leadership Committee, which made about $350,000 in independent expenditures in support of a selection of GOP legislative candidates in 2016 and spent about $15,000 to help Berthel, said an all-out effort by Democrats to elect Cava failed.

“This victory preserves a critical tie in the chamber, allowing Senate Republicans to serve as a counterbalance to Democrat Gov. Malloy and his allies in the legislature, and setting a positive tone for 2018 — when the GOP will have a chance to flip the Senate for the first time since 1996,” he said.

Connecticut Republicans hope the state remains on Walter’s radar in 2018 and he once again funnels money into the local political action committee the RSLC funds, Grow Connecticut.

J.R. Romano, the Republican state chairman, said neither the 2nd nor the 32nd was a good test for 2018, since neither was close to competitive terrain. A massive effort on behalf of Cava, including volunteers from outside Connecticut, still produced only a 10-point loss, he said.

“They can spin this any way they want,” Romano said. “At the end of the day, they didn’t win.”

House Majority Leader Matt Ritter, D-Hartford, said Republicans will have trouble avoiding a debate in Connecticut about Trump in the run-up to the elections in 2018, when U.S. Sen. Chris Murphy, a Democrat who has become a voice of opposition to the president, is up for re-election.

“The Republicans have been quick to look at everything at the state level and run on those issues. They now have to ask themselves, ‘What are we going to do about the federal level? And what are we going to do about President Trump?’ ” Ritter said. “There is momentum and energy against this president. The question has to become, ‘What does the state Republican Party think about their president?’ ”

Michael Mandell, the executive director of the Connecticut Democratic Party, said one lesson from Cava’s campaign is that angst over Trump can be focused into energy on behalf of legislative candidates.

“Coming from a 35-point defeat in November, this is a clear signal that the people of that district came out with energy to work hard and organize and show they would not be in support of President Trump’s agenda,” Mandell said.

In Windsor, McDonald demurred and suggested that Republicans stick to their message that it is time for new leadership in Hartford.

After a month of campaigning door-to-door, he said he was convinced dissatisfaction with Connecticut’s rocky fiscal and economic environment will be the only issues that matter in 2018, when all 187 legislative seats will be up for re-election and there is expected to be an open race for governor.

This story was updated on March 1 with the graphics below.