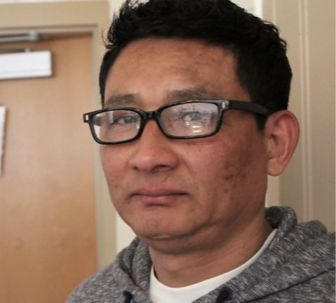 The Trump Administration’s plan to deport more immigrants now has a face and a name in New Haven: Wilmer Galo-Andino.

The U.S. Immigration and Customs Enforcement (ICE) division of the federal Department of Homeland Security informed Galo-Andino he must leave the country — leaving behind his 9-year-old daughter — by March 23.

Galo-Andino, a 46-year-old C-Town supermarket worker who has lived in New Haven for 12 years, is the first publicly known, local undocumented immigrant affected by a policy change ordered by President Donald Trump.

He received a stay of deportation under President Barack Obama, who had ordered immigration officials to concentrate deportation efforts on violent felons and had sought to allow parents of U.S.-born children to stay here (under a quashed program called Deferred Action for Parents of Americans and Lawful Permanent Residents, or DAPA). Galo-Andino’s stay expired; earlier this month ICE turned down his request for a new one.

“I have carefully reviewed your file … and I have determined that the granting of such discretionary relief is not sufficiently warranted,” ICE regional Field Office Director C.M. Cronen wrote to Galo-Andino in a letter delivered to his lawyer this past Friday. “… There is no appeal from this decision.”

An ICE officer left a Post-it note directing Wilmer to “report back March 9th with a plane ticket to depart the U.S. by March 23rd. Direct flight out of the United States.” (A regional ICE spokesman failed to return repeated requests for comment before this story was published.)

“My world fell upon me,” Galo-Andino said in an interview Sunday as he watched his daughter Liana play soccer in Fair Haven, where they live. He hasn’t yet told her he has to return to Honduras, where he fears the gang violence that led him to pay a coyote to help him cross the U.S. border back in 2005.

His attorney, Sharyn D’Urso, said Galo-Andino fell victim to a change in federal policy under the new Trump administration, a change that is keeping her working six-and-a-half-day weeks.

D’Urso called Galo-Andino’s pending deportation “inhumane. This is not the America I know. It shouldn’t be that we separate families. Where are our priorities?”

Gangs were “ravaging everything”  and Galo-Andino felt in danger when he decided to make the perilous trek from San Pedro Sula, Honduras, to the U.S. back in 2005, he said. He traveled first to Mexico, then paid a coyote $7,000 to shepherd him into Texas.

“I crossed the river. There were six people and me,” he recalled. “We walked. Then immigration caught us. They took us to a holding cell.”

That was in San Antonio. Galo-Andino was released with a court date. Instead of showing up in court — where he expected to be returned to Honduras — he fled north to New Haven, where relatives had settled. 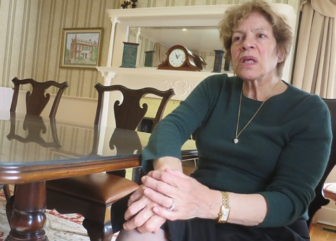 He built a life here, holding a steady job stacking shelves and moving boxes at C-Town and marrying a U.S. citizen with whom he had a daughter.

He also stayed out of any trouble until Dec. 11, 2014, when New Haven police arrested him on a misdemeanor charge of driving while under the influence. The way he tells it, he and coworkers were drinking beer in his car in the C-Town parking lot after their shift ended on a Saturday night. Police saw the beer cans there and arrested him.

Whatever the merits of the case, Galo-Andino accepted accelerated rehabilitation, and the charge evaporated from his record.

But not before he came to the attention of ICE.

While in the state prisoner lockup (now a city-run lockup) on the evening of his arrest, he recalled, an officer there noted that he had an outstanding case in San Antonio for failing to show up in court back in 2005.

The following Monday, when he showed up in the Elm Street court on the misdemeanor driving-while-intoxicated charge, the judge told him that his immigration record was of no concern here. He was told he would remain in the court lockup until 7 p.m., then be released.

Someone had tipped off ICE about his whereabouts. At 4 p.m., agents arrived, handcuffed Galo-Andino, put him in a van, and transported him to ICE’s regional offices in Hartford.

He spent a month in an immigrant detention center in Massachusetts before being released, with orders to report to the Hartford regional office for follow-up proceedings. He returned home to New Haven — minus $900 worth of belongings, including a cell phone, that he had had on him at the time of his arrest. “They said it got lost.”

Galo-Andino hired D’Urso, who has represented other members of his family as well. They successfully applied for a stay of deportation, given his clean record, his steady work life, and his family situation (U.S.-born wife, young daughter).

He applied for a renewal of the stay last year. Meanwhile, when he went to Hartford for a regular ICE visit, agents took his passport away.

“That’s when I started getting really worried,” Galo-Andino recalled. He was already aware that a new president had promised to deport millions more undocumented immigrants with a wider net.

By last Thursday, when he had another appointment in Hartford, he didn’t know that ICE already had ruled against his stay request; the rejection letter, though written, hadn’t yet been delivered. But he sensed he might have reached the end. He decided to bring Liana with him to the meeting; he wanted her to see, he said, that “I wasn’t abandoning her. They were taking me away.”

That indeed turned out to be ICE’s intention, D’Urso said. She said she prevailed on the three agents present at the meeting first to allow Galo-Andino’s brother to take the daughter to another room; then to release Galo-Andino that day, given his record of showing up for appointments. They agreed, but told him he’d have to leave the country soon.

Galo-Andino cried on the way home. “What’s going on? Why are are you crying?” Liana asked. He didn’t tell her the full story, that her father would soon be gone.

On Friday the letter arrived with the decision on the stay and the Post-it note to present by March 9 the plane ticket to send him away by March 23.

Right now Galo-Andino is scrambling to make plans — to buy the ticket, to arrange for Liana’s care. He and his wife are still legally married but separated; he has custody of his daughter, and they live with his brother. His estranged wife, with whom he said he remains on good terms, will probably raise Liana now.

Galo-Andino said he wonders how he’ll find work in the depressed economy back in Honduras. He said the gangs are as present, and menacing, as ever. As of Sunday, he was still hoping for a miracle as he made his plans. And he prepared to break the news to his daughter.