Washington – President Donald Trump sought to shift his tone during his first address to Congress, striving for unity and renewal – but did not succeed in bridging a partisan divide.

Members of the all-Democratic Connecticut congressional delegation, like most members of their party, refrained from applauding the president for much of the speech.

“Building a wall, suspending our refugee program, breaking up families — these are symptoms of hatred and fear. We can do better,” DeLauro said in one of her tweets

But grim-faced Democrats  stood and clapped – and GOP lawmakers largely remained seated – when  Trump said, “We will stop the drugs from pouring into our country and poisoning our youth, and we will expand treatment for those who have become addicted.”

Both sides of the aisles cheered Trump when he said, “The time has come for a new program of national rebuilding,” and said Congress should approve a massive infrastructure bill.

“To keep America safe we must provide the men and women of the United States military with the tools they need to prevent war and – if they must – to fight and to win,” Trump said.

Rep. John Larson, D-1st District, said he appreciated Trump for “taking a gentler” approach in his speech to Congress than he has in previous speeches.

Larson commended Trump for raising the need for paid sick and family leave, but said “some of the address was a campaign speech” of promises with little detail on how they could be carried out.

Trump’s repeat of calls to rapidly repeal the Affordable Care Act and to build a wall between the United States and Mexico, and his insistence immigrants are taking U.S. jobs and boosting the crime rate were cheered by Republicans and given a thumbs down by Democrats.

“This speech was mostly vague platitudes, vacuous assurances, and appeals to fear,” said Sen. Richard Blumenthal. “The nation needs a leader with a real vision for our future – not empty promises. We deserve more than an administration that pledges unity, then governs by fear.”

Democrats booed and hissed when Trump announced the creation of a new Justice Department office called VOICE, for Victims of Immigration Crime Engagement, to address the needs of victims of crimes committed by undocumented immigrants.

Traditionally the president should be in office for a year before he gives his first State of the Union address, using the opportunity to seek support from Congress on a legislative agenda.

Since Trump has been in office for a little more than a month, his speech Tuesday night was called a joint session of Congress, not a State of the Union.

“I would say he’s affected the  state of the union quite a lot already,” said Rep. Elizabeth Esty, D-5th District.

DeLauro wore white, like many Democratic lawmakers, to channel the suffragette movement and signal their determination to defend women’s rights.

“We’ve worked with Republican presidents and Democratic presidents and seen very little as far as the promises he made on jobs and infrastructure,” DeLauro said. “We’re prepared to work together, but there are no details or legislation.” 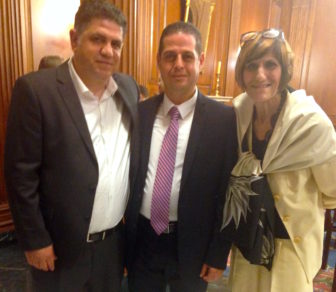 Sen. Chris Murphy said Trump, in his speech, was “sort of less crazy, but that is a low bar.”

“At some point the president has to recognize that his job is not to make promises but to deliver on promises,” Murphy said.

Gov. Dannel Malloy said, “Though President Trump spoke about unity, justice, and a stronger middle class, unfortunately, the vision he presented tonight falls short on providing a path forward towards these ends.”

Some of Trump’s claims have stumbled upon fact-checking  including his claim to have “saved taxpayers hundreds of millions of dollars by bringing down the price of a fantastic new F-35 jet fighter.”

Lockheed Martin and the Pentagon say they were in negotiations to bring down the price of the 10th lot of the fighter jets for months before Trump assumed office.

Many of the guests Democrats invited to the speech were tapped to make political statements.

Esty’s guest was Waterbury Police Chief Vernon L. Riddick, Jr., who earlier in the day attended a Capitol Hill presser on gun control. Advocates for tougher gun laws are on the defensive, with the National Rifle Association and Republican lawmakers pressing for a new law that would end the requirement that purchasers of gun silencers pay a $200 fee or wait for months after filing extensive paperwork with the U.S.Bureau of Alcohol, Tobacco, Firearms and Explosives.

“If it ain’t broke don’t fix it,” Riddick said of the proposed changes to the silencer law.

Some Democrats invited guests from one of the seven nations named in Trump’s “Muslim ban,” an executive order that was blocked by a federal court.

“I invited Marwan to be my guest because I spent an extraordinary amount of time in the Intelligence Committee thinking about national security,” Himes said. “(Trump’s executive order) makes our country less safe not more safe…it’s an ISIS recruiting tool.”

Blumenthal was joined by Hewad Hemat, a refugee from Afghanistan who fled his home country after his work on behalf of the United States provoked the Taliban to threaten him and his family.

DeLauro said the guests were more than symbolic rebukes of Trump’s policies, they were reminders of the “living, breathing human beings” who will be affected by those policies.

Members of the U.S. House and Senate and other dignitaries listen to President Trump’s address in the House chamber.