Murphy: The GOP health plan is a ‘dumpster fire’

Washington – It’s surprising Chris Murphy is only in his first term in the U.S. Senate because for a freshman he’s had a an amazing amount of visibility on a number of hot-button issues ranging from gun control to diplomatic flash points.

Murphy volunteered to be a key Senate defender of the Affordable Care Act and has given dozens of speeches on the floor of the Senate on the subject, so he was ready with a blistering tweetstorm of criticism when House Republicans released their plan to repeal and replace the ACA.

Right before the bill’s release last week, Murphy was chosen to give the Democratic response to President Donald Trump’s speech. The subject? Health care, of course.

The Connecticut Mirror spoke to him about the prospects of the Republican “American Health Care Act” and a few other things, including the Trump travel ban on people from six Muslim majority nations, another issue on which Murphy is leading the opposition.

Is there any way the GOP health care plan can pass the Senate?

The Republicans have an awful product on their hands. This is a dumpster fire of a bill and Republicans and Democrats know it. Essentially it takes healthcare away from millions of Americans to pay for tax cuts for the wealthy. That’s what the bill is. That’s a hard sell for Republicans and Democrats… Hundreds of thousands of people in Connecticut would lose their health care because of this bill.

But a lot is at stake for Republicans if this bill does not pass. Their campaign promise for years is that they would replace Obamacare…

Was it? Their main campaign promise was that they would get rid of the Affordable Care Act and replace it with something better. There is not a single Republican who can stand up and say this expands health care coverage or it lowers costs. I haven’t heard a single one make that argument. 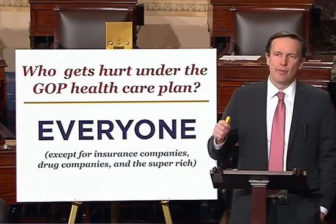 The subsidies are meager and the bill allows insurance companies to jack rates up for people in the 40s and 50s and 60s.

So you would rather the GOP end their efforts to repeal the ACA and just fix it?

It’s not only Ryan who used the term death spiral, Aetna CEO Mark Bertolini used it, too.

There are plenty of insurers that are staying in. And the vast majority of Americans have choice in these exchanges. But a big part of the problem is that Donald Trump ordered his administration, his agencies to start taking apart the Affordable Care Act and Mark Bertolini said that after Trump ordered his agencies to start pulling apart the Affordable Care Act.

But insurers left the exchanges and premiums went up…

Certainly and part of this is the natural phenomenon of a new market. A lot of the people who are on these exchanges hadn’t had health care for a long time. So they are expensive at the outset. Over time the cost …would go down because people would get the care they had been postponing for all the time they were uninsured.

Did the Democrats do a poor job of selling the Affordable Care Act? It seemed its popularity rose when people realized it would go away.

I think that’s human nature. People over and over tend not to raise alarm until something important gets taken away.

What happens if the GOP health plan is not approved, if it dies?

I don’t know. I hope if this terrible, horrible, awful bill dies, Republican sit down to work with Democrats to try to find improvements to the existing law.

The Trump administration’s new travel ban takes effect Thursday. What prompted you to propose legislation that would block it?

This ban, even in its modified form, is making America less safe. I want to show the world that not everybody in America hates Muslims like this administration seems to. This proposal is compromising U.S. security every day it is out there.

What role should Democrats in Congress play in this new political era?

Eventually Republican are going to have to pass things in the Senate that need more than 50 votes.

So you’re saying that Republicans should reach out to Democrats whenever possible?