Syrian refugee talks about the impact of Trump travel ban 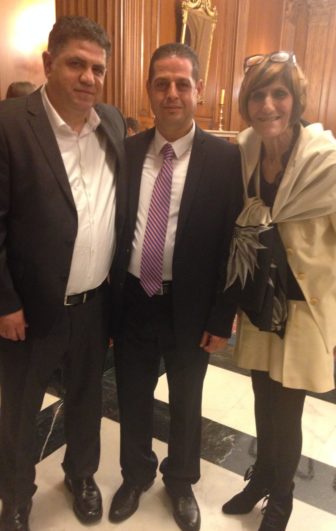 Washington – Fadi Kassar, 40, traveled a long, hard road through several countries before arriving in Connecticut and being granted asylum in 2015.

A native of Syria, a country suffering a brutal six-year civil war, Kassar was about to reunite with his wife and two young daughters last month when President Donald Trump’s travel ban prevented the reunion.

In the weeks between the two executive orders, Kassar’s family was able to rejoin him here from Jordan, partly through the efforts of Sen. Chris Murphy and Rep. Rosa DeLauro, D-3rd District.

The  presidential executive order is likely to now become a protracted legal and political battle.

If implemented, the temporary ban would affect Kassar’s fellow Syrians more than citizens of the other five Muslim-majority nations on the restricted travel list — Somalia, Yemen, Libya, Sudan, and Iran. But, as Kassar’s story shows, it already has had an impact here and abroad.

Like Kassar, millions of his fellow Syrians are stateless because of the conflict in his homeland, which has been completely destabilized as warring factions, including ISIL and loyalists to Syrian President Bashar al-Assad battle for control.

Trump’s travel ban would also cut in half the number of refugees the United States will accept and halts the entry of any of them for at least 120 days.

In Connecticut, Kassar lives in Milford and works with his brother in-law Sammer Karout at his hookah lounge. With his brother-in-law serving as an interpreter, Kassar spoke to the Connecticut Mirror about his view of the human cost of Trump’s travel ban – and how it is changing the perception of the United States in the Muslim world.

What is your impression of the United States after living here for a couple of years?

It’s a beautiful country with wonderful people. I was treated well by everyone. But it takes a while to get used to the culture.

You came here without your family and were going to be reunited after 25 months. Your wife and daughters, Lian, 5, and Hnan, 8, were flying to New York through Kiev, Ukraine. And then there was a problem. How did you hear about that?

I received a call from Kiev saying the family’s passports were confiscated and they were going to be sent back to Jordan. I was granted asylum after living in the United States for a year and applied for asylum for my family. That took another year. My family’s case was sent to the American Embassy in Amman, Jordan, where they were interviewed and they got their visas. Then we made arrangements for them to come to the United States.

One problem with the original executive order is it was implemented immediately, catching hundreds of travelers unaware and in the process of coming of coming to the United States…. 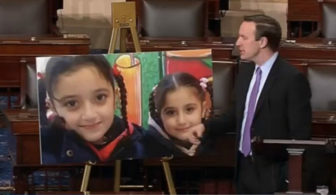 Sen. Chris Murphy on the Senate floor using a photo of the Kassar girls while discussing the family’s situation.

I called the attorney who filed the asylum case for me and he called Senator Murphy and Congresswoman Rosa DeLauro’s office. And he got help from the senator and congresswoman and some human right organizations.

I don’t know really if it was media or the congressional representatives or the court.  There was an exception made for those who were in transit. But maybe it was a collective effort. After two days my wife went back to the airport to collect her luggage, and they told her to contact the airline and they were told they got clearance from immigration officials at JFK (International Airport.)

When you heard the news that they couldn’t come, how did you feel?

Hopeless, sadness. It was like life didn’t have any meaning any more. It was very sad, especially for the two little girls because since I applied for their asylum a year ago I had been promising we would be reunited soon and we were going to have our own apartment with their own toys. Every time I called my family, the little girls would ask me, ‘When are we going to see you? When are we going to reunite?’ And then finally it was the moment to reunite and they were sent back to Jordan. It was very sad and hopeless. They didn’t even eat for two days.

Now they are going to impose the travel ban again, this is going to affect a lot of people like you.

Yes, I know someone else who is here and whose family is in Syria; their situation is really bad now.

You say the executive order should have never been signed…

The first thing is the humanitarian reason, but it’s also contrary to American law.

Did it change the opinion of the United States in the Muslim world?

Yes, of course because a lot of Muslims look at the United States as the leader of the free world. They love American democracy. They are innocent; they love America. They are not extremist or radicals. They hate radicalism and have nothing to do with radicalism. They view American as a nation of rule of law and freedom that accepts refugees and immigrants. It’s a country founded by immigrants.

So you think the travel ban is counterproductive…

Every nation has laws to make sure their country is safe. They could tighten security but not put a ban on countries where people are fleeing extremism and violence. There is not one incident where a Syrian has committed an act of terrorism against an American on American soil. They were not among the [9-11] hijackers.

This interview was edited for clarity and length.