Gorsuch’s comments came in response to Blumenthal’s questioning of the nominee, a judge on the Colorado-based 10th Circuit Court of Appeals, during the second day of confirmation hearings before the Senate Judiciary Committee. Blumenthal asked him what he thought of Trump’s characterization of a Seattle-based federal judge as “the so-called judge” whose ruling on the travel ban put the nation in peril.

Though he said he couldn’t address specific cases that brought on Trump’s attacks, Gorsuch said, “When anyone criticizes the honesty or the integrity or the motives of a federal judge, I find that disheartening. I find that demoralizing — because I know the truth,” Gorsuch told Blumenthal.

“Anyone including the president of the United States?” Blumenthal asked?

“Anyone is anyone,” Gorsuch said.

During a courtesy visit to Blumenthal in February, the senator said Gorsuch called such comments by the president “disheartening and “demoralizing.”

Under questioning by Blumenthal Tuesday, Gorsuch said “judges have to be tough, we get called lots of names.”

Blumenthal pushed him on Trump’s attacks on the federal judiciary, but Gorsuch said, “I can’t comment on specific cases.”

At the day-long hearing, Democrats tried to pin Gorsuch down on a number of hot-button issues, including abortion, gay rights, assisted suicide, gun control and labor rights. But Gorsuch deftly deflected their questions, repeating again and again, “I can’t get involved in politics.”

“No man is above the law,” Gorsuch said

Over and over again, Gorsuch said he is beholden to no ideology or partisan agenda. 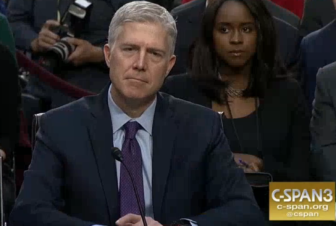 Judge Neil Gorsuch listens before the opening of  questioning by senators at his confirmation hearing.

But Blumenthal and other Democrats on the panel tried to make the case that is not true. Blumenthal asked the nominee if he had ever discussed the abortion rights case Roe v. Wade with Trump or his staffers.

Gorsuch said the issue of abortion was raised once in a conversation with Trump in which the president said he could have won the state of Colorado if he had spent more time campaigning there.

“He said abortion was very divisive, and he moved on to other topics,” Gorsuch said.

Blumenthal also grilled Gorsuch about a 10th Circuit Court of Appeals ruling blocking an attempt by Utah’s governors to strip state funding from Planned Parenthood. Neither party in the case asked for a rehearing of the case, but Gorsuch did. His colleagues voted narrowly against a rehearing.

Sen. Al Franken, D-Minn., sparred with Gorsuch about the nominee’s dissent in the case of a Chicago truck driver  who was fired after abandoning his cargo when no one came to help him during a breakdown, and he was stuck for hours in freezing temperatures. Gorsuch sided with the trucker’s employer.

I had a career in identifying absurdity, and I know it when I see it,” said Franken, a former “Saturday Night Live” performer and writer.  “And it makes me question your judgment.”

Gorsuch said he would have done the same as the truck driver and had thought often about the case.

“I totally empathize,” he said.

On another occasion, Gorsuch said he had participated in 2,700 opinions and, “I’ve ruled for the little guy as well as the big guy.”

The confirmation hearing is scheduled to continue through Thursday.