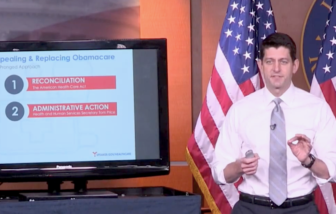 Washington –  President Donald Trump and House Republicans are making both threats and promises to try to salvage the GOP health care bill – but the deal-making is all on the Republican side of the aisle, with Connecticut’s all-Democratic congressional delegation sitting on the sidelines.

“This is horse-trading right now,” said Rep. Rosa DeLauro, D-3rd District. “They are going back and forth until they can get the votes.”

While Democrats are not sitting at the negotiating table, that doesn’t mean Connecticut’s lawmakers were idle. They joined a Democratic strategy to intensify attacks on the GOP plan, which would cut federal Medicaid funding to states and result in an additional 24 million uninsured by 2026, according the Congressional Budget Office.

About 85,000 Connecticut residents receive subsidies to purchase health coverage under the Affordable Care Act and another 217,000 get care through the law’s expansion of Medicaid.

From a Democratic “war room” established in the office of House Minority Leader Nancy Pelosi just steps from the House chamber, lawmakers were encouraged to tap Facebook Live to get their message out to voters. As part of Pelosi’s self-described “all hands on deck” policy, Democrats also were encouraged to publicize stories of constituents who would be helped by the ACA.

Dorothy Thompson of Manchester, who suffers from fibromyalgia, a chronic pain condition, said she is worried she would have to resort to a high-risk pool whose premiums are unaffordable if the ACA is repealed.

Susie Clayton, a breast cancer survivor and North Canaan selectman, said the end of the ACA “would devastate someone my age with a pre-existing condition.”

“Obamacare saved us,” she said of herself and her husband.

Larson said constituent stories have “resulted in putting this bill on pause.”

But the GOP lost votes on the AHCA because conservatives think the replacement bill is too generous and keeps too many provisions of the ACA, including “essential benefits” provisions that require insurers to provide certain coverage, including maternity benefits, substance abuse help and mental health care.

Some conservatives want to scrap other provisions of the ACA that have proved to be very popular, including allowing children to stay on the policies of their parents until age 26 and banning insurers from denying coverage to people with pre-existing conditions.

“This is going in exactly the wrong direction,” Esty said of the negotiations.

Trump and House Speaker Paul Ryan, R-Wis., have worked to mollify members of the conservative House Freedom Caucus while simultaneously trying to minimize defections by GOP moderates whose want a more robust bill.

As of midafternoon Thursday, 37 House Republicans – mainly Freedom Caucus members — had announced their opposition to the bill. The GOP could afford to have no more than 21 defectors since all House Democrats were expected to vote against the bill.

Trump has been involved in the negotiations, meeting with Freedom Caucus members several times this week. Late Thursday afternoon, he met with moderate Republicans.

House leaders rescheduled the vote for early Friday afternoon. But it’s not clear they will have the votes for passage by then. A vote on the health care plan that was scheduled in the Senate for next week is also up in the air.

“They are at sixes and sevens,” DeLauro said. “They can’t come to an agreement.”

House Republicans conservatives wanted to strip their bill of certain ACA provisions that still remained in the AHCA, including “essential benefits” and the ban on denying coverage to people with pre-existing conditions.

Late Thursday, GOP leaders agreed to allow a vote on an amendment to the health care bill that would repeal the mandate on essential benefits, keep a 0.9 percent Medicare surcharge on high-income earners for six more years and add $15 billion to a fund that would help states shore up health care coverage.

But several GOP senators have objected to the Medicaid cuts and reductions of benefits in the bill, endangering the legislation in that chamber if it doesn’t get changed to cover more people.

“Whatever passes the House would lose votes in the Senate,” Esty said.

In addition, it’s not clear a bill that eliminates those provisions would adhere to Senate rules on passing a “reconciliation” bill, which cannot be filibustered but must contain only measures that are budget-related.

The American Health Care Act would shift much of the burden of providing health care to the states as it cuts federal Medicaid funding and reduces the amount of federal subsidies the poorest and oldest Americans now receive to purchase insurance. 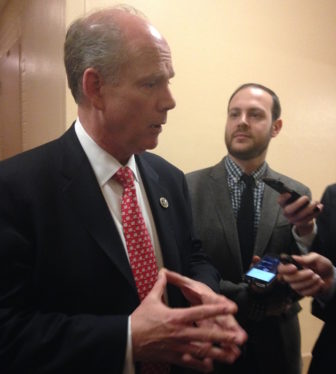 It would give states $100 billion over nine years to help fund high-risk pools and to use for other purposes.

And it gives states 45 days after the bill becomes law to come up with a health care plan to replace the ACA.

Democrats like DeLauro hope faltering political and public support for the AHCA may keep the Affordable Care Act alive.

But the GOP made elimination of the ACA a top campaign promise, and there is a lot at stake for the president and his party.

“I don’t know if the bill will pass or not, but we’ll keep trying,” said Rep. Dan Donovan, R-N.Y.

Donovan also said he will vote against the health bill the House will consider Friday.