Blumenthal, Murphy not yet among Dems opposing Gorsuch 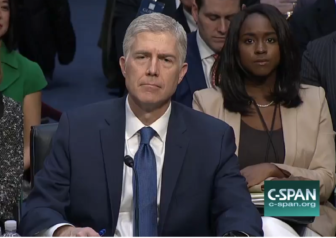 Washington – At least 19 senators have said they will not vote for Judge Neil Gorsuch’s confirmation to the Supreme Court, but Sens. Richard Blumenthal and Chris Murphy have not joined that group, at least not yet.

“I have made no final decision,” Blumenthal said.

Murphy said, “I’m continuing to review Judge Gorsuch’s testimony from the more the 20 hours of questioning in the Senate Judiciary committee last week”

Blumenthal, a member of the Senate Judiciary Committee, said he is likely to announce his decision later this week or early next week – that’s when Blumenthal is likely to be in the state because the Senate isn’t expected to be in session.

Gorsuch, a judge on the Colorado-based 10th U.S. Circuit Court of Appeals, underwent a grueling marathon confirmation hearing last week in the Senate Judiciary Committee. During intense questioning, Democratic senators – including Blumenthal – waged a largely fruitless battle to get the nominee to shed any light on his judicial leanings, which have been compared to those of the late Justice Antonin Scalia, whom Gorsuch would replace on the high court.

If confirmed, Gorsuch would restore a conservative majority on the nine-seat high court. He’s viewed as likely to be a key a conservative vote on many of the most pressing issues facing the Supreme Court, including abortion, gay rights, religious liberty, gun-safety legislation and protections for workers and the environment.

“Frankly, I’m concerned by his refusal to answer basic questions and his troubling record of putting corporations before the rights of workers,” Murphy said. “We need a judge who will keep politics out of the courtroom and be willing to stand up to presidential abuses. I won’t support Judge Gorsuch unless I am sure he will be a mainstream voice in the court.”

Blumenthal said he is waiting for Gorsuch to answer a list of questions he submitted to the nominee before he makes a decision.

They include questions about his views on privacy rights and judicial independence, “areas that he failed to answer” during questioning last week, Blumenthal said.

“I was deeply troubled by his failure to be more forthcoming,” Blumenthal said.

Blumenthal asked Gorsuch’s opinion on more than a half dozen landmark Supreme Court decisions, including the school desegregation case Brown v Board of Education and the abortion rights case Roe v Wade.

In every instance, Gorsuch replied they were important Supreme Court decisions that he would weigh as important precedents, but declined to say how he felt personally about the decisions.

“I know they are all decisions by the Supreme Court,” Blumenthal said.
“The question is ‘does he agree with them?…He has impressive credentials, he is articulate and intelligent but his core beliefs remain in question.”

On Monday, Judiciary Committee Democrats forced a postponement of a vote on Gorsuch in the panel for a week. Still, it’s likely the committee, which has a Republican majority, will approve him next week,

A confirmation vote by the full Senate is expected on April 3.

But Senate Minority Leader Charles Schumer, D-N.Y., has threatened a filibuster, which would require the nominee to win at least 60 votes for confirmation.

“He will have to earn 60 votes for confirmation,” Schumer said.

Although only 19 senators, Democrats and independents, have come out against the confirmation, most Democrats are expected to vote against it, depriving the GOP of the 60 votes it needs. There are only 52 Republicans in the Senate.

For Democrats, putting up a fight would at least frustrate President Donald Trump and placate liberal activists who are upset about the Republican refusal to vote to consider the nomination of Merrick Garland, former President Obama’s nominee to the same open seat.

The Senate’s Republican leadership could adopt a rule change, dubbed the “nuclear option,” that would allow confirmation with only a simple majority of the chamber.

When they had control of the Senate in 2013, frustrated Senate Democratic leaders changed the rules so they could confirm district court and circuit court judges – as well as cabinet nominees – with a simple majority. But the rules change did not apply to Supreme Court nominees.

“The Supreme Court is different,” Blumenthal said. “That vote ought to be by more than a razor-thin majority.

Blumenthal also said “if I conclude a ‘no’ vote is appropriate, I will use every tool available, including the filibuster.”