When the kids are American, and the parents face deportation 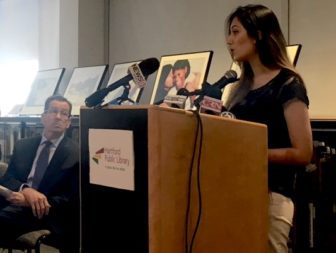 “I don’t use the term, because I think it’s confusing,” Malloy said of sanctuary city. “But I certainly won’t criticize other folks for using the term.”

Connecticut opened an outreach campaign Wednesday to undocumented immigrants in the state who are the parents of an estimated 22,000 American-born children, urging them to select a “standby guardian” in the event they are detained or deported.

The state Department of Children and Families, currently the guardian of 4,200 children who come to it through all manner of crisis, would face additional annual expenses of at least $60 million if 10 percent of the children of the undocumented end up in the care of the state because of the Trump administration’s promised crackdown on undocumented immigrants, officials said.

Malloy disagreed with the Trump administration over whether the detention of undocumented immigrants who are not wanted for crimes or otherwise deemed safety risks makes any sense or is even legal.

“I’d rather protect liberty than be on a fool’s errand, led by fools that would destroy that liberty,” Malloy said. “We’ll protect our Constitution, even if the people in Washington won’t.”

The defiance does not extend to civil disobedience by Malloy or the mayors of Hartford and New Haven, which often are called sanctuary cities.

Malloy and the mayors, Luke Bronin of Hartford and Toni Harp of New Haven, reiterated that they are complying with federal law as they obey a state law, the Connecticut Trust Act, that says, “No law enforcement officer who receives a civil immigration detainer with respect to an individual who is in the custody of the law enforcement officer shall detain such individual,” absent one or more factors

Those include a felony record, pending felony charges, gang membership or links to terrorist groups.

Malloy, a former prosecutor, said the Trust Act is based on case-law about the risks of police locking up someone based on an administrative order, not a warrant signed by a judge, and public policy centered around a desire not to leave undocumented immigrants afraid to interact with police.

So far, the Department of Justice under Trump has not taken formal action contradicting Malloy or the mayors over the Trust Act or local policies that given New Haven and Hartford the label of “sanctuary cities,” a term that has no legal definition. On Wednesday, Bronin pointedly referred to Hartford as “a caring city.”

“I don’t use the term, because I think it’s confusing,” Malloy said of sanctuary city. “But I certainly won’t criticize other folks for using the term.”

The Department of Homeland Security did list Hartford in its “Table of Jurisdictions That Have Enacted Policies Which Limit Cooperation with ICE,” or Immigration and Customs Enforcement, saying the city “will not arrest or detain a person based solely on their immigration status unless there’s a criminal warrant.”

The question of how local police should handle questions of immigration status is not new, though the election of Trump has given it new urgency. Police in Los Angeles adopted policies similar to the provisions of the Trust Act in 1979.

Malloy said the Trust Act is not in conflict with federal law or the U.S. Constitution, despite suggestions to the contrary by some Trump administration officials or, earlier, the Obama administration.

“There is no law that allows the federal government to tell local officials how they have to handle immigration. It does not exist, and if it it did, it would be illegal and violative of the Constitution of the United States,” Malloy said. “So, these folks in Washington are making things up as they go along. That’s what they’re doing, and they need to be called on it. I’m disappointed some other states don’t call them on it.”

The outreach for undocumented parents to prepare for what Malloy called the possibility, not the certainty, of deportation and detention was launched on the third floor of the Hartford Public Library, long a hub for immigrants, documented and otherwise. Its “American Place” program offers classes in English and citizenship and counseling on issues of immigration status.

Malloy also was joined by two commissioners, Joette Katz of DCF and Dora B. Schriro of the Department of Emergency Services and Public Protection, which includes the State Police.

Schriro, who is a lawyer, offered an overview of the rights of any undocumented immigrant, if agents of Immigration and Customs Enforcement come to their homes. She urged immigrants to talk to everyone in their household about what to do if ICE agents visit.

“If ICE knocks at your door, you do not have to open the door for ICE or any police officer, quite frankly, without a warrant that is signed by a judge,” Schriro said.

The officials talked about the need for preparation for ICE as though discussing a coming storm, urging people to read a new guide with a checklist of important documents to set aside: every child’s birth certificate, passport, and Social Security number.

The 18-page pamphlet is called, “Family Preparedness Plan — Preparing Your Family for Immigration Enforcement,” and is available at the library and on the state’s web site. It reminds parents to record the names and numbers of their child’s day care or school, any babysitters, after-school caregivers — really any player in the day-to-day, week-to-week life of a child in America.

There is a prompt for “helpful things to know about (name of child),” such as favorite foods, bedtime routines, favorite toys and “screen time rules.”

Katz called it a helpful guide for all parents to prepare for an unplanned absence. The difficult section is the one that has flummoxed generations of parents who go to a lawyer for a will and breeze through every question but one: Who gets the kids?

Undocumented parents are instructed on how to legally designate a standby guardian.