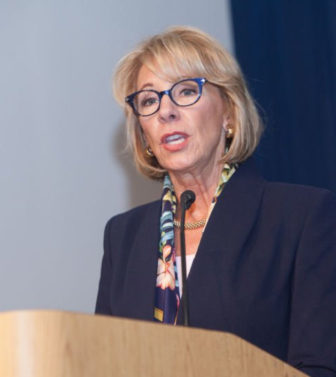 U.S. Education Secretary Betsy DeVos isn’t concerned that a push for more school choice could inadvertently harm America’s schools, she said Wednesday — because she believes the nation’s achievement is already too abysmal for that to be possible.

“I’m not sure how they could get a lot worse on a nationwide basis than they are today,” DeVos said of achievement levels. “The fact that our PISA scores have continued to deteriorate as compared to the rest of the world, and that we’ve seen stagnant at best results with the NAEP scores over the years — I’m not sure that we can deteriorate a whole lot.”

DeVos was referring to one international test and another taken by a sample of students across the United States that’s used to compare performance across states. Her comments, made at the Brookings Institution, paint a picture that’s more dire than fully accurate.

On the international PISA tests in reading and science, the U.S. hovers near the international average, though it falls near the bottom of other industrialized countries in math. And on the NAEP tests, often referred to as the “nation’s report card,” math scores have been rising for decades, as moderator Russ Whitehurst noted, while reading scores have also increased, though much more slowly.

The comments reveal an unflinchingly negative guiding premise for the nation’s top education official: With nowhere to go but up, any disruption of the current system is, by definition, going in the right direction. (She pushed that idea further by invoking the fight between Uber and taxi companies as a parallel for the push for school choice.)

At the same time, DeVos indicated that she was uncomfortable using statistics as the basis for some of her own policies.

“I’m not a numbers person in the same way you are,” DeVos said, when asked specifically how she would want her success to be measured. “But to me, the policies around empowering parents and moving decision-making to the hands of parents on behalf of children is really the direction we need to go.”

You can watch her speech and her discussion with Whitehurst afterward here:

Originally posted on Chalkbeat by Sarah Darville on March 29, 2017.