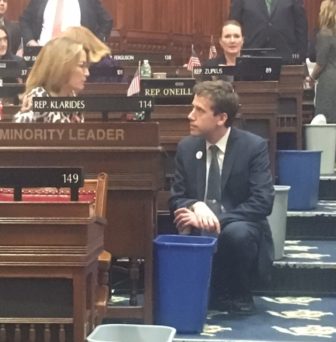 Matt Lesser finally got his meeting with Themis Klarides.

It might be a harbinger of a politically fraught session, evidence of a general deterioration of the relations between Democrats and Republicans. Or it might turn out to be a momentary flash. Whatever the case, a perceived insult quickly escalated Wednesday, then slowly cooled.

Instead of clearing the air with Rep. Matt Lesser, D-Middletown, who made the bigotry remark during a press conference without directing it at a specific target, Klarides attacked Tuesday and again Wednesday, Aresimowicz said.

Her staff followed up Wednesday with a poster mocking Lesser and accusing Democrats of paying their female staffers less than males.

“This morning, he requested a meeting,” Aresimowicz said of Lesser. “That could have settled it. Unfortunately, she didn’t take the meeting. I’ve always considered her a friend and genuinely like her, but she is the leader of a caucus and needs to act like it. A leader doesn’t scream, ‘Fire!’ They lead people to a safe harbor.”

Patrick O’Neill, a spokesman for Klarides, said Lesser did go to Klarides’ office to ask for “five minutes with her,” but Klarides was not immediately available to see him. Klarides had no immediate comment on Aresimowicz’s comments.

Aresimowicz postponed debate on the pay equity bill, saying the reason was that Democrats were working on revisions, not because Lesser’s remark would bring a retaliatory filibuster by the GOP.

“As a woman who values equal pay for equal work as much as anyone in the legislature, and who has witnessed pay inequality, I am deeply offended by his remarks,” Klarides said of Lesser. “Unfortunately, given his track record I can’t say I am surprised.’’

Republicans view Lesser as a repeat offender when it comes to making intemperate remarks that question the motives of opponents. As a sophomore in 2011, Lesser drew a rebuke when he used Twitter to chastise Republicans during a debate on a transgender discrimination bill: “Tonight’s debate on adding gender identity & expression to state’s non-discrimination laws being hijacked by ugly fear-mongering.”

Lesser was unapologetic then, saying, “I  tweeted what I tweeted. And I believe it sincerely.” 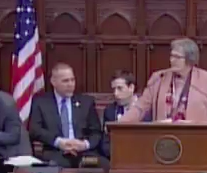 On Wednesday, he declined to comment after Aresimowicz appeared to call him to the dais for a heart-to-heart during the session in full view of the House.

Klarides has her own history of reacting forcefully to perceived insult.

She halted business in the House for five hours in 2015, leading her caucus on a walkout to protest Gov. Dannel P. Malloy’s criticism of GOP members for opposing his plan to stop racially disparate drug sentencing. Republicans said Malloy called them racist.

At issue was Republican opposition to Malloy’s proposal to repeal stiffer penalties for drug possession within 1,500 feet of a school or day care, which exposes most urban drug defendants to enhanced sentences. Sixty-four percent of those charged with drug possession in school zones are minorities.

“To treat those folks differently because they live in those communities is patently unfair and, if not racist in intent, is racist in its outcome,” Malloy said.

Republicans agreed to resume business then after Democratic leaders distanced themselves from Malloy’s remarks in an unusual joint press release with Klarides.

“We cannot condone injecting racism into the debate over challenging legislation,” said Aresimowicz, then the majority leader. “Questioning the intentions of those with differing opinions is counterproductive to the work that needs to be done in the legislature.” 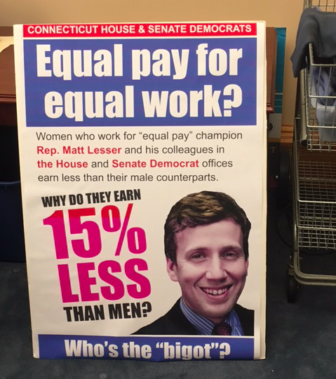 A poster on display in the House GOP office.

“At the end of the day, in this chamber we all respect each other,” Ritter said. “We all work together. My understanding is that Matt will meet with Themis. They’ll have a good conversation, and we’ll all move on from this.”

They later were seen chatting by Klarides’ desk.