A defeat for Malloy’s bill to expand juvenile court jurisdiction 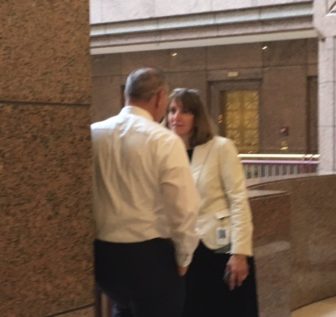 Gov. Dannel P. Malloy is struggling for the second consecutive year to convince the General Assembly to expand the jurisdiction of the juvenile courts to spare some young adults criminal records that can limit employment opportunities over a lifetime.

The legislature’s Judiciary Committee declined Friday to report the legislation to the floor, even as a study bill. Every bill remaining in the possession of the committee died at 5 p.m., the panel’s deadline for acting on legislation.

“It’s unfortunate that the clock ran out before the Judiciary Committee concluded all its business,” said Kelly Donnelly, a spokesperson for Malloy. “But the good thing about our legislative process is that conversations about important issues such as these can and will continue this year — especially when they have budget implications.”

The administration says it will try to revive the measure as an amendment to another bill later in the session if it can find a consensus for a revised version. The governor’s proposal has won accolades nationally from criminal justice reformers and was imitated in Illinois, Massachusetts and Vermont.

But Malloy’s idea has been largely greeted with indifference by Democrats and hostility by Republicans.

The governor’s bill eventually would give the juvenile courts jurisdiction over criminal defendants up to age 21, unless they are charged with a serious felony or a Superior Court judge determines the case should remain in adult court. A similar version never came to a vote last year,

It was reintroduced this year with the benefit of a study Harvard researchers produced for the Juvenile Justice Policy and Oversight Committee, whose members include a dozen legislators and representatives of law enforcement and social services.

Vincent Schiraldi, one of the researchers, said the proposal reflects science showing the human brain does not fully develop until the mid-20s, leaving older teens as far more impulsive than someone in their late 20s.

“A lot of people are like, ‘This is hoohey. Nineteen-year-olds are adults. Why are we thinking of treating them like children?’” Schiraldi said last month at an event to promote the bill. “Yes, you can have a perfectly rational conversation with your 19-year-old son about Aristotle and the philosophy class he is taking and the paper he’s writing that night. But then he can go out and do something inexplicably stupid with his buddies that night.”

The “hooey factor” has been hard to overcome, and skeptics had the easier task Friday.

With a 5 p.m. deadline, any opponent of the measure could kill it simply by being willing to talk. The meeting had been scheduled to begin at noon, but behind-the-scenes efforts to find consensus on a variety of bills pushed back the start until 3:05 p.m.

The bill was raised for discussion at 4:45 p.m.