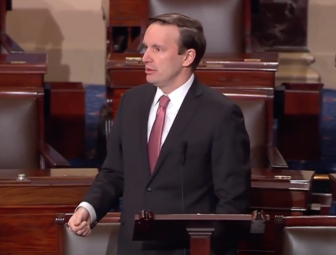 Washington – Even as President Donald Trump aims to slash the State Department’s budget, Sen. Chris Murphy is battling the headwind in an effort to double the money appropriated for many diplomatic programs.

Murphy, a member of the Senate Foreign Relations Committee and the Senate Appropriations Committee, has come up with “Rethinking the Battlefield,” his plan to promote diplomacy as an alternative to war and a way for the United States to increase its influence around the globe and boost national security.

At a speech to the Council on Foreign Relations, Murphy said his plan to boost the State Department’s budget may not be possible in the fact of Trump’s attempts to downsize the agency.

Murphy has been one of Trump’s most vocal critics on foreign policy — even as the president has yet to reach his first 100 days in office.

“Building a bigger moat  is wrong and dangerous,” he said. “A strong American military is still vital to guard against conventional security threats, but the emerging threats to global stability exert influence that cannot be checked with military power alone.”

But Murphy thinks the money can be better spent on State Department international aid programs, the Peace Corps and an anti-propaganda campaign aimed at combatting Russian and Chinese disinformation, and on boosting the number of diplomatic staff at U.S. embassies around the globe.

Murphy said Trump’s aim is to “fund the Department of Defense with what they need and give crumbs for diplomacy.”

As far as the administration’s air strike on Syria last week, Murphy said Trump was not “constitutionally authorized” to order the attack because he did not advise Congress – or seek authorization for military action. Murphy also said about 500 U.S. troops are being deployed in Syria without congressional consultation.

“Congress hasn’t weighed in on anything on Syria,” he said.

Murphy’s speech to the Council on Foreign Relations came on the heels of his op-ed, published in the Huffington Post, entitled “Cruise Missile Hypocrisy.”

Murphy also said the Russians, Assad’s allies, were prompted to abandon their vow to keep the Syrian president in check when it came to chemical weapons by the “perceived permission slip they have been granted by the Trump administration.”

Murphy also said Trump’s policy to ban all Syrian refugee resettlement in the United States, along with “Trump’s proposal to cut by 40 percent the funds that help settle refugees in other countries, will condemn far more children to death than were killed by chemical weapons this week.”