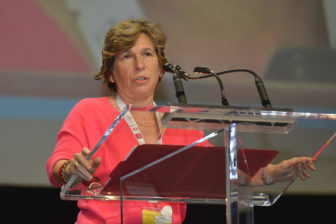 At Edsel Ford High School, students took turns last Tuesday sharing their goals for the semester. Sixteen-year-old Kamal Mohamad wants to get better grades. His classmate Almjd Alghaithi wants to finish all of his math assignments.

Nodding along was Randi Weingarten, the head of the American Federation of Teachers, who spent the morning at the Dearborn, Michigan, school to advance a goal of her own: getting the Trump administration to redirect public funding from cracking down on immigration to supporting public schools.

She was there to kick off a campaign called Building Schools, Not Walls, just two days before she will visit schools with U.S. Education Secretary Betsy DeVos. DeVos has faced criticism for her focus on school choice — especially private-school vouchers — and her lack of personal experience with public schools.

“I see the secretary of education as a student,” Weingarten told Chalkbeat. “We’re educators — we have an abiding belief that people are educable, including secretaries of education.”

“That’s why we are making the effort, despite lots of people wondering, given her track record, why we’d even bother.”

Weingarten chose Ohio’s Van Wert City Schools, a small district in northwest Ohio, about an hour and a half away from Toledo, for that joint visit. It’s in “Trump country,” she said. “It’s schools that do project-based learning, have grappled with rural poverty, schools that engage in children’s well-being, and that’s why we wanted her to see it.”

The tour will coincide with the new, two-week campaign announced at Edsel Ford. The initiative, led by the AFT and the Alliance to Reclaim Our Schools, aims to encourage President Trump and DeVos to rethink their plans for the national budget and education, pushing for more funding for schools, less money for a wall between the U.S. and Mexico, and a focus on providing a high-quality, inclusive education for all students. The group will release a report later this month explaining why those shifts are better for the country.

The focus on openness and diversity has particular resonance in Dearborn, where nearly two-thirds of the district’s public school students are Arab-American.

“This is the model of what public education in America needs to achieve,” Michigan Congresswoman Debbie Dingell, who grew up in Dearborn, said during the press conference, nodding toward Edsel Ford Principal Scott Casebolt, who is credited with helping turn the once-struggling district around.

The congresswoman also pointed out the obligation Americans had to make sure all students were not only educated but felt safe.

“When parents, who are Americans, they have lived here two or three generations, they and their children have American passports, and the kids say to me, ‘I’m scared, they’re going to knock on my door at 2 a.m. and deport our whole family,’” she said. “This is what the kids in this community are living with and scared about every single day.”

This story was originally posted on Chalkbeat by Allie Gross on April 18, 2017. Chalkbeat is a nonprofit news site covering educational change in public schools.

Gov. Ned Lamont will need an extra $200 million in the next biennial budget to bolster the teachers' pension fund.

The University of Connecticut announced Friday that its entire Storrs campus will be placed under quarantine.