Joe Ganim to explore the limit of second chances 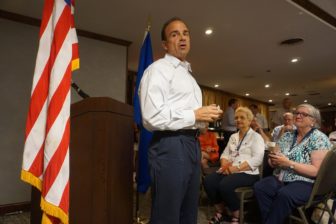 With the formation of an exploratory committee for governor, Bridgeport Mayor Joseph P. Ganim is about to test the notion of whether Democrats statewide are as forgiving as voters in Connecticut’s largest city.

Ganim, 57,  faces the task of not only convincing Democrats he is not the same man who quarterbacked a $500,000 shakedown scheme after his election as mayor years in 1991, but that a redemption narrative can sell in a state that seems in an unforgiving mood when it comes to its politicians.

In a telephone interview, Ganim said there are no secrets in his biography, which includes a conviction of 16 corruption counts that forced him from office in 2003 after a dozen years as mayor. He was released from prison in 2010.

Ganim said he will answer questions as they come, but his focus will be talking about how Connecticut’s struggling cities can become engines for economic growth. Connecticut must find its place in an era of new urbanism, when millennials are looking to cities as places to work and live, he said.

He becomes the fifth Democrat to form a committee that will allow him to begin raising money for a potential entrance into the open race for governor in 2018, which already has attracted more than a dozen candidates from both parties. One of them is Chris Mattei, the former head of the U.S. attorney’s public corruption unit. The others are Comptroller Kevin P. Lembo, Middletown Mayor Dan Drew, and Jonathan Harris, a former state senator.

On Thursday night, Ganim taped an interview about his interest in running for governor on WFSB’s “Face the State,” which airs Sunday.

“I think people felt, when you get past the difficult stuff, that I was a very effective mayor, and I got things done,” Ganim said during his 2015 campaign. “And I affected their lives in a positive way.”

He took an initial step toward a gubernatorial candidacy by asking the State Elections Enforcement Commission on April 7 to clear him for the state’s public financing program, despite his corruption conviction.

With that request still pending, Ganim returns to the commission Friday to file papers creating an exploratory committee.