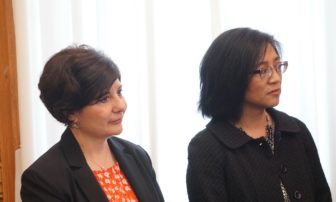 Gov. Dannel P. Malloy nominated Judges Nina F. Elgo of West Hartford and Maria Araujo Kahn of Cheshire to the Appellate Court on Tuesday, setting the stage for women to become a majority on Connecticut’s second-highest court for the first time.

The judicial milestones Malloy can claim after six years as governor include nominating majorities of the Supreme and, as of Tuesday, Appellate courts, while expanding gender and racial diversity throughout the court system.

Women comprise just 35 percent of the Superior Court judges, while 40 percent of Malloy’s nominees have been women. Overall, 30 percent have been minorities, twice the percentages of his two immediate predecessors.

“About 52 percent of our population is women,” Malloy said. “Getting to 40 percent is a good thing.”

Malloy said a goal remains finding qualified nominees who eventually will help the court system reflect the population of Connecticut.

Malloy’s latest nominees are experienced trial judges, each appointed to the Superior Court by his two immediate Republican predecessors: Elgo by John G. Rowland in May 2004; Kahn by M. Jodi Rell in April 2006.

Elgo’s previous assignments include presiding judge of the statewide child protection docket in Middletown, the juvenile division in New Haven and the criminal courts of Hartford and Enfield. She is a graduate of Connecticut College and the Georgetown University Law Center.

The daughter of parents from the Philippines, Elgo was the first Asian Pacific American judge in Connecticut and will be the first on the Appellate Court.

Judges and lawyers who have practiced in the family courts, where difficult cases involving parental rights are litigated, have increasingly attracted disgruntled parents and other critics in lengthy confirmation hearings before the legislature’s Judiciary Committee.

“We have a court system. The court system is asked to do difficult things from time to time,” Malloy said. “What I ask is they do it with great respect for the individuals who appear before them, and I know that these two individuals have that reputation.”

Kahn is currently co-chair of the Access to Justice Commission and the Limited English Proficiency Committee and is a member of the Sentence Review Division of the Superior Court. She also is a mentor to other judges. She is a graduate of New York University and the Fordham University School of Law.

Kahn was born in Africa to Portuguese parents.

With the elevation of the two judges, pending confirmation by the legislature, the Superior Court system will have about 40 vacancies, a sizable percentage in a system with 185 authorized positions, Malloy said.

Because of the fiscal situation, Malloy said, he will fill only a limited number of those positions.

Eric D. Coleman of Bloomfield, who resigned from the Senate in January to seek a judicial appointment, is in the pool of candidates cleared by the Judicial Selection Commission, according to a source at the Capitol.

Governors can only choose nominees for the Superior, Appellate and Supreme courts who have been interviewed and approved as qualified by the commission.