Comey: No regrets over Clinton emails, but he’d rather have been on the CT shore 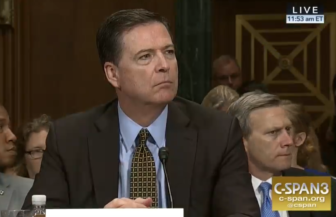 Washington – FBI Director James Comey on Wednesday vigorously defended his handling of a probe into Hillary Clinton’s emails and deflected Sen. Richard Blumenthal’s questions about whether President Donald Trump was a target of an FBI investigation into Russian meddling in U.S. elections.

During a Senate Judiciary Committee hearing, Comey confirmed to Blumenthal that his agency is investigating whether there are Russian ties to the Trump campaign and said the names of suspects in that investigation are being disclosed to the GOP chairmen and the top Democrats on the House and Senate intelligence committees.

Blumenthal, a member of the Judiciary Committee, pressed Comey on whether Trump was among those targeted by the investigation.

“I’m not going to comment on anyone in particular, because if I say no to that, I have to answer succeeding questions,” Comey replied.

Trump tweeted Wednesday, “The phony Trump/Russia story was an excuse used by the Democrats as justification for losing the election.”

The tweet was an apparent response to Clinton’s comments Tuesday in which she blamed the FBI and Russian hackers for her electoral loss.

Much of the hours of questioning centered on Comey’s decision to notify Congress, less than two weeks before the presidential election, about new emails relating to the investigation of former Secretary of State Clinton’s use of a private email server for official business.

Blumenthal asked if he regretted that move, or would have done anything differently.

“The honest answer is no,” Comey said. “I’ve asked myself that a million times because, Lordy, has this been painful. The only thing I regret is maybe answering the phone when they recruited me to be FBI director and I was living happily in Connecticut.”

Comey moved to Connecticut in 2010 to become the general counsel for Bridgewater Associates, based in Westport.

About his handling of the Clinton email investigation, Comey told Blumenthal, “I’ve got all kinds of rocks thrown at me, and this has been really hard.”

Earlier in the hearing, Comey said it made him “mildly nauseous” to think his disclosure could have altered the course of the election.

Clinton and her supporters maintain it did.

Blumenthal also pressed the FBI director on whether he thought a special prosecutor should be appointed to handle the investigation into possible Russian ties to the Trump campaign.

“That’s a judgment for the deputy attorney general on this matter and not something I should be commenting on,” Comey responded.

Blumenthal is pressing for a special prosecutor because he says neither the FBI nor the congressional intelligence agencies that are investigating whether Russia tried to alter the outcome of the presidential election can bring criminal charges against anyone. Only the deputy attorney general, a Trump appointee, has the authority to do so if an independent prosecutor is not in place.

Blumenthal scored one win when he asked Comey if he supported efforts to expand FBI background checks of gun purchasers.

“The more information we have the better, from a law enforcement perspective,” Comey replied.