Feds give Barrios a 30-day stay of deportation 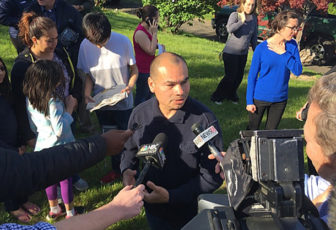 Washington – Federal authorities have given Guatemalan immigrant Luis Barrios, who in Connecticut has become the face of the Trump administration’s immigration policy, a 30-day stay of a deportation that was to have occurred in the early hours of Thursday.

Connecticut lawmakers have interceded in Barrios’ case, saying the married father of four, who has held the same job for more than a decade, posed no threat to his community. They said his deportation would leave his family devastated and without a source of financial support and Barrios faced the threat of death in his homeland.

After receiving word from Immigration and Customs Enforcement, Sen. Richard Blumenthal said he called Barrios to tell him of the last-minute reprieve.

“I hope that ICE reaches a conclusion in this case that grants Mr. Barrios the permanent relief he and his family deserve,” Blumenthal said.

Barrios, who lives in Derby, said he fled violence in his native Guatemala, where family members have been killed. But he lacked legal status and was ordered to be deported in 1998 after he failed to show up for an asylum hearing.

In 2011, immigration authorities caught up with Barrios after he was pulled over by state police for a broken taillight.

He and his family were able to stay in Derby precariously on yearly stays from removal, until now.

Rep. Rosa DeLauro, D-3rd District, who like Blumenthal and Sen. Chris Murphy pressed ICE to stop its plans to deport Barrios, said, “While this is great news, Luis deserves to remain in this country with his family, and I strongly believe that this action should be made permanent.”

“The United States must do all that it can to end the practice of breaking up families, once and for all,” DeLauro said.

She has pressed ICE and the Justice Department to use “prosecutorial discretion” in Barrios’ case.

During the Obama administration, especially its last two years, federal immigration authorities were urged to use discretion in prioritizing immigrants targeted for deportation. Former President Obama said he wanted to deport “felons, not families.”

While the Trump administration says it is continuing the Obama-era policy of prioritizing the removal of dangerous felons, it is casting a much wider net.

Obama directed federal authorities to focus on “hardened criminals,” those engaged in  gang activities. and those who were detained within 100 miles of the U.S.-Mexico border and entered the United States no more than two weeks before.

But two memos signed by  Homeland Security Chief John Kelly in February changed all that. They say immigrants who are in this country for two years or less are now subject to expedited removal – that means deportation without any hearings. The directives also scrap the 100-mile limit, meaning those living anywhere in the country can be targeted for immediate deportation.

The change in policy has outraged immigration advocates, including those who protested on Barrios’ behalf in Hartford on Tuesday.

Connecticut lawmakers said they would continue to push ICE to grant Barrios asylum.

“The danger and potential violence that Luis could face back in Guatemala if he is forced to return is real and serious,” Murphy said. “My office will keep working hard to make sure he can stay here at home in Connecticut.”