This time, Newtown bike riders rolling away from Congress

Members of Team 26 bike past the U.S. Capitol Thursday before starting their ride to Newtown to build support for tighter gun laws.

Washington – With Donald Trump in the White House and a GOP lock on Congress, the 26 bike riders who roll hundreds of miles every year from Newtown to the U.S. Capitol to honor those slain in Sandy Hook Elementary School decided to change course.

Instead of riding from Newtown to Washington, D.C., to lobby Congress for tighter gun laws, as they’ve done for each of the last four years, Team 26 began their journey at the U.S. Capitol Thursday and will ride north to Connecticut. They hope to arrive in Newtown on Sunday.

“In the four years we’ve ridden here, Congress has failed to act,” said Monte Frank, an attorney who organized the group of cyclists.

Since Congress has turned its back on them, Frank said, this year Team 26 will cycle through towns that have an interest in combatting gun violence, “places where there is action.”

Those include Baltimore, Trenton, Philadelphia, the University of Delaware and Morristown, N.J.

As far as hopes for new federal gun control bills, “we have tough days ahead of us,” Frank  said.

While Congress’ has failed to act on  major gun control legislation since 20 first-graders and six educators were slaughtered by gunfire at Sandy Hook Elementary School in December of 2012, it also has not done anything major to weaken federal gun laws.

There is special concern about two bills the National Rifle Association is pushing. One would eliminate regulations on gun silencer; the other would make concealed-carry permits valid across state lines.

Rep. Elizabeth Esty, D-5th District, who joined all other members of the Connecticut congressional delegation Thursday in welcoming Team 26 to the Capitol, said they are “two terrible bills.”

She said the concealed-carry law, would make a “mockery of state laws,” and said some of Connecticut’s neighboring states have lax laws concerning the carrying of guns, including Maine, Vermont and New Hampshire.

Esty also said the silencer law, which would eliminate the requirement that buyers pay a $200 fee and wait for months after filing extensive paperwork with the federal Bureau of Alcohol, Tobacco, Firearms and Explosives, is promoted by the NRA as a way to boost sales.

“Once you have a Barbie, you need the accessories,” Esty said. 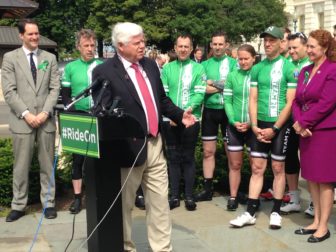 Trump last week was the first sitting president since Ronald Reagan to speak to the NRA at its national convention.

“No longer will federal agencies be coming after law-abiding gun owners. No longer will the government be trying to undermine your rights and freedoms as Americans,” Trump said. “Instead we will work with you by your side.”

But, while his rhetoric was supportive, the president did not promote any of the NRA’s initiatives in his speech.

Still, Rep Joe Courtney, D-2nd District, said he’s concerned about the rhetoric from the Trump administration on guns, singling out Secretary of the Army candidate Mark Green, “who actually said Americans should have the same rights as the military to have weapons.”

“Sometimes I lose faith that we can do anything about this,” he said.

“The NRA has a head start on us…but we are catching up,” he said. “What this is about in the end is convincing members of this body when they go back to their districts, if they continue siding with the NRA rather than 90 percent of their constituents, they will lose their seats.”

To Sen. Richard Blumenthal, D-Conn., Team 26’s yearly ride “is a metaphor for the American fight against gun violence.”

“Every turn of the wheel and every mile and every voice marks progress,” he said.