Barrios’ deportation case one of many in CT 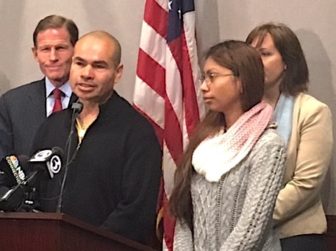 Luis Barrios and his daughter, Jessica, with Sen. Richard Blumenthal.

Washington – The case of Luis Barrios, a Guatemalan native who faces deportation after decades of living in Derby and raising a family in the United States, has captured the sympathy of his neighbors and key federal lawmakers, who have intervened to try to keep him in the United States. But his case is not unique.

Since Homeland Security Chief John Kelly signed two executive orders in February, the fate of many undocumented immigrants like Barrios — who has never been arrested for a crime and is guilty only of failing to appear at an asylum hearing — has changed.

Before Kelly signed the executive orders, Barrios and other otherwise law-abiding undocumented immigrants were not considered priorities for removal. Now they could be.

The directives scrap President Obama’s order that immigrants who have been in this country longer than two years, and have not committed a serious crime, be at the bottom of a deportation priorities list.

Kelly’s directives to Immigration and Customs Enforcement, and other federal immigration authorities, say immigrants in this country for two years or less are now subject to expedited removal – that means deportation without any hearings. The directives also say federal agents can seek to deport people in the country illegally who were convicted of any crime, no matter how minor. In fact, agents could prioritize for deportation people who have just been charged with a crime — or people who have committed an act for which they could be charged with a crime.

ICE was to deport Barrios in the early hours of Thursday but gave him a 30-day reprieve.

“He has lived in this country since 1992, raising a family. His four children are U.S. citizens, working hard and playing by the rules. He has no criminal record, and his case is one that eminently cries out for asylum,” said Sen. Richard Blumenthal, D-Conn., one of the Connecticut lawmakers who interceded on Barrios’ behalf, at a press conference in Hartford on Friday.

Barrios has plenty of company.

ICE has begun to ramp up the number of immigrants who are being placed in removal proceedings.

According to federal data, federal agencies arrested 21,362 immigrants from January through mid-March, compared with 16,104 during the same period last year.

Arrests of immigrants with no criminal records more than doubled, to 5,441 in that period. The statistics were first provided to the Washington Post.

“This is the Trump era. Progress is being made daily, and it will continue,” said Attorney General Jeff Sessions, who has begun to reorganize the Justice Department to prosecute more immigration cases.

Blumenthal said immigrants who have lived in this country for a substantial period of time and “played by the rules” should not be priorities for deportations. For years, congressional Democrats, and some Republicans, have tried to pass legislation that would provide a way for these immigrants to obtain legal status, perhaps by paying fines and back taxes

But now chances that Congress will approve a comprehensive immigration bill that would legalize the status of some 11 million immigrants in this country illegally appear dim.

“Now the policy is to eliminate the exemption for people who do not have criminal records,” Blumenthal said. “Anybody that has an order for removal will be deported. That was not the policy previously.”

But immigration lawyers are pushing back.

According to TRAC, Syracuse University’s Transactional Records Access Clearinghouse, the latest available case-by-case records from the federal courts show that between Jan. 20, the day President Trump was inaugurated, and the end of March, 763 new civil immigration lawsuits were filed in disputes involving immigration matters like Barrios’.

“Under President Trump, monthly filings in March were up 40.5 percent when compared with those of the same period in the previous year,” TRAC said.

Troyb said centers that help women who are victims of domestic abuse say immigrant women are not reporting cases to the police or renewing their protective orders because they are concerned they will be deported.

“There’s absolutely a fear in the community that there will be raids as well,” Troyb said. “And that fear is not groundless.”

Valent Kolami, an Albanian who is facing deportation, appeared with Barrios at Blumenthal’s press conference Friday.

Kolami arrived in the United States in 2000 and was victimized by a lawyer who mishandled his application for legal status.

Kolami first was detained pending a deportation order during the Obama administration. Kolami and his brother-in-law were freed and their deportations delayed after Blumenthal interceded.

But Kolami and his brother-in-law now face deportation again.

“I am hopeful we can continue to intervene in these cases and seek stays of deportation for people who need and deserve them,” Blumenthal said.