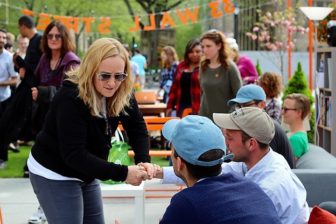 Singer-songwriter Melissa Etheridge greets Yale fasters Aaron Greenberg and Lukas Moe in her visit to the campus to show her support.

After nine days of consuming nothing but water, the Yale graduate student-teacher fasters have made their first substitution.

The fasters are protesting to try to convince Yale to negotiate a first contract with the union, which represents some of the graduate students who teach undergraduate courses. They have grown visibly weaker over the first nine days, as a community of supporters has risen up around the protest shed across from the university president’s office. The fasters have said from the beginning that once they determine they are in medical danger, they will begin eating again and have other protesters take their place.

Alyssa Battistoni, a fifth-year doctoral student in the political science department, has stepped up to take Powers’ place. It’s been a call that she said she was prepared to receive. She got it earlier in the week.

“So far things have been good,” she said. “I have been a little nervous about starting. It’s been challenging to transition, but there has been a lot of support around me from our support team and our medical team.”

On Thursday, a quiet zone had been established under the 33 Wall St. shed where several fasters camped out, alternately dozing and just trying to conserve energy. Outside the quiet zone, people were chatting quietly at tables, or quietly clicking away on their laptops in the sun.

Battistoni said in her five years at Yale she has watched fellow grad students, particularly women, struggle to finish their degree and juggle their families. Though she doesn’t have children, she said it is important to her as a woman in academia for such gender equity issues be addressed. She said it also has been troubling to her to see cuts to pay for upper-year graduate students who should be compensated properly for the work they do.

She said in those five years she has watched the evolution of the fight to get union representation and to have that representation recognized by the powers that be at the university through the act of negotiation.

“All of the fasters have committed to fasting until we get a chance to negotiate,” she said. “There are those of us who are prepared to step in and carry the fast forward. I am the first one to do so, and I am honored to join the fast.”