Malloy to Trump: Maybe you’re not fit, but welcome anyway 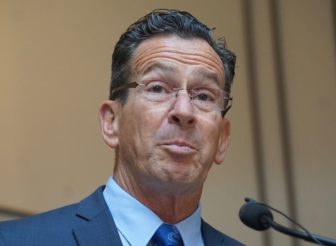 Gov. Dannel P. Malloy intends to welcome President Trump to the Coast Guard Academy in New London next week, but that didn’t stop him from suggesting Friday that, well, maybe Trump falls short of Harry Truman’s standard for what it takes to be president.

Malloy invoked Truman when asked about the president’s firing of FBI Director James Comey, and the administration’s chaotic response to the outcry, including Trump’s taunting of Comey on Twitter and his surprise that Democrats opposed canning him while the FBI is investigating whether the Trump campaign colluded with the Russians.

Malloy archly referred to Trump’s suggestion, presumably tongue in cheek, on Twitter earlier Friday that he may have secretly recorded a White House meeting with Comey: The governor lowered his voice and asked, “Is anyone recording this?”

But Malloy, who clashed with Trump during the campaign as a Hillary Clinton surrogate and chairman of the Democratic Governors Association, briefly stammered before giving a fuller answer, acknowledging expecting to see the president at the Coast Guard commencement exercises on Wednesday.

“You know, I, uh, the president’s coming to the state next week, so I want to be careful in my use of words,” Malloy said.

The governor’s reticence was fleeting.

“If the president, and I think he did, assumed that Democrats would be happy because he fired Comey, what a massive miscalculation on his part,” said Malloy, a former prosecutor. “The reality is Democrats like to see our criminal justice system work.

“The reality is Democrats don’t believe you should interrupt an investigation in its middle, or beginning, or perhaps even its end stages. Democrats were not going to support the president in what is obviously steps that he’s taken because he doesn’t like the fact his relationship and that of his administration with the Russians in the campaign are gaining scrutiny.”