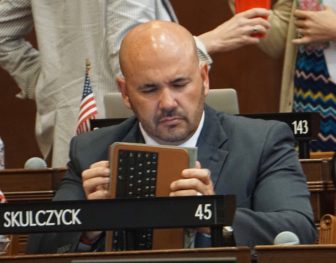 Rep. Kevin Skulczcyck, R-Griswold, the retired correction officer who tweeted on Mother’s Day about whether Connecticut should consider chemically castrating child molesters, compares himself to President Trump, at least when it comes to sharing blunt opinions on Twitter.

“You know, me and Donald Trump share one thing: We have a fascination with just saying what we think,” Skulczyck said. “I should’ve bought Twitter stock. He’s definitely done some things with it. I use it as a powerful tool. I don’t hold back.”

Skulczyck, a freshman House Republican who won an open Democratic seat last year, posted a tweet at 4:23 a.m. to his 276 followers during a break in his workout. It was a link to a New York Daily News story about a Republican state legislator making his third try for a castration law in Alabama.

“I plan to introduce a bill next year,” Skulczcyk said in the Tweet. “Thoughts??’

“Seriously?” replied @CHURCHLADY320, one of nine to reply. Another reaction on Twitter came from a WATR-AM talk show host: “Would you be interested in being my guest on Talk of the Town to discuss this?”

Skulczcyck, who retired in 2012 after 21 years as a correction officer, said he wants to force a debate next year on chemical castration for sex offenders who victimize children, which he says includes the use of pharmaceuticals to temporarily or permanently kill the sex drive.

Use of drugs or hormones to kill a sex offender’s sex drive is allowed in eight states.

“Believe me, I don’t think this is a law I would even consider for low-ranking violations or statutory rapes. That’s not what we’re after,” he said. “These are the most severe, heinous crimes, especially when it comes to children.” 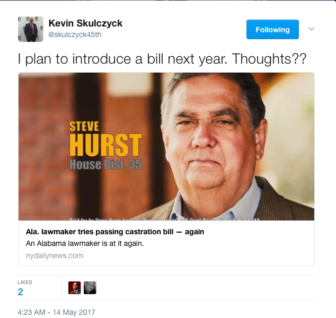 He has tweeted before about sex offenders. Last week, he opposed a bill barring the state from denying an occupational license to barbers, hairdressers and cosmeticians solely because they have a criminal record. It passed 127-22.

“I was a NO vote,” he wrote on Twitter. “Sex offenders will be circumventing the system. I hope the Senate votes it down. Bad Bill.”

Backers of the bill noted that some inmates learn to become prison barbers, then are banned from being barbers after their release. The conservative Yankee Institute, which favors policies increasing employment opportunities for released inmates, was among the supporters.

Skulczyck, who did not respond to a request for comment on Sunday, acknowledged in an interview Tuesday that Twitter’s 140 characters don’t allow for nuance or detail, but he called it an effective medium to open conversations.

“You’re talking to me,” he told a reporter. “Twitter is a vehicle. It’s not journalism. It’s a vehicles for a conversation or a thought, and it stimulates, right?”