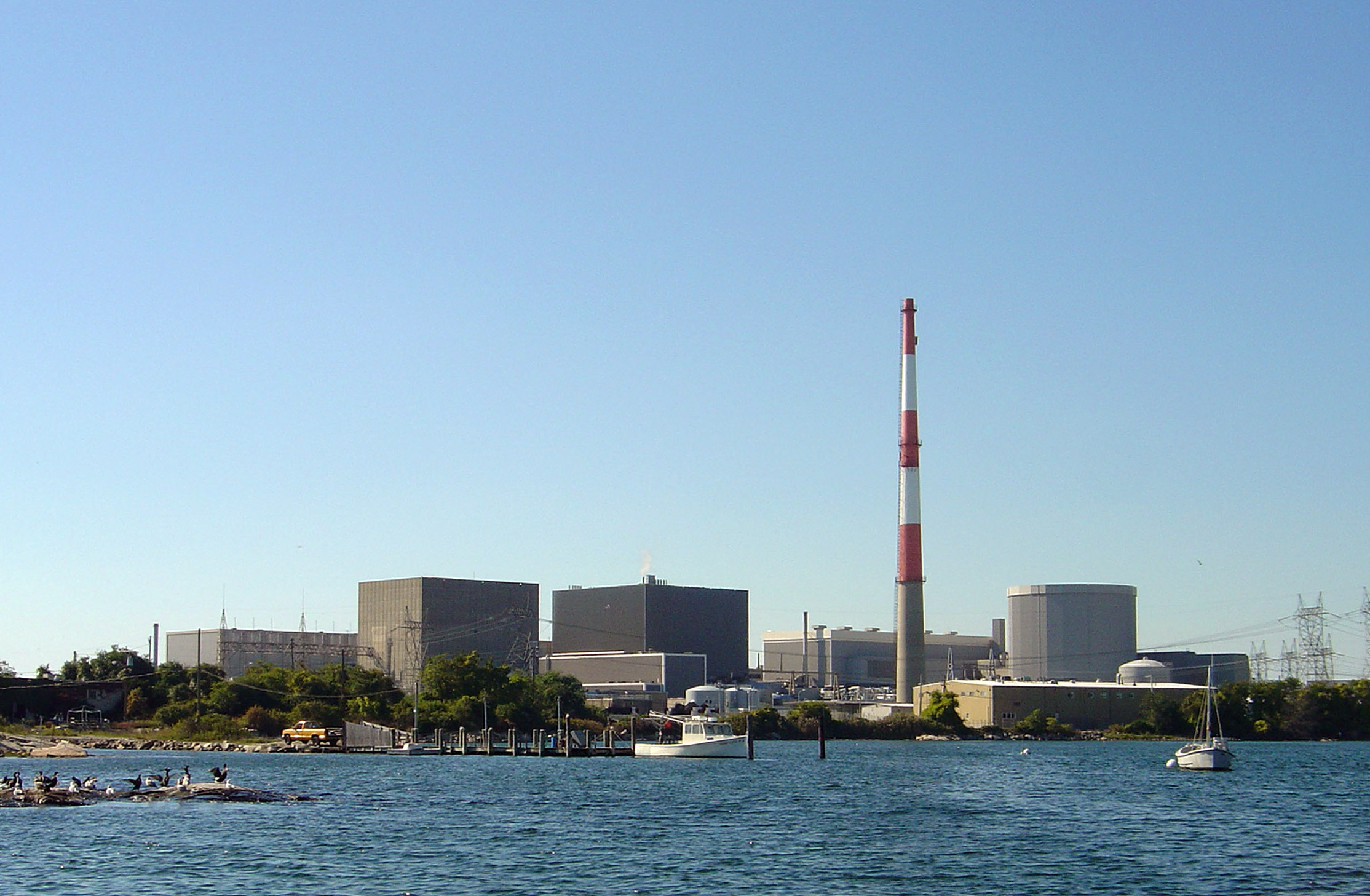 Connecticut’s master plan for energy use and policy is months behind its three-year update, and now the Department of Energy and Environmental Protection says it will not be ready in time for legislators to consider this session.

The lack a Comprehensive Energy Strategy (CES) leaves lawmakers, in their final few weeks of the legislative session, without policy guidance on a number of energy issues — most critically and controversially, whether to give competitive help to the Millstone Nuclear Power Station.

With TV ads and ferocious lobbying on both sides of the issue after tight committee votes — especially in the Appropriations Committee, where a plan to help Millstone barely survived 23-21 — it’s unclear whether any Millstone legislation will survive; and, if it does, whether it will do more than authorize a study. Lack of an energy strategy putting Millstone in the context of broader long-term energy policies isn’t helping matters.

“We are at a tipping point, and Millstone is the least important part of this story,” said Rep. Lonnie Reed, D-Branford, co-chair of the Energy and Technology Committee. “The most important part is that we are in the throes of adopting energy policies that will direct and control our next 30 years of energy investments.”

Reed, along with DEEP Commissioner Rob Klee, confirmed that there are active negotiations involving DEEP, Energy Committee principals, environmental advocates and others on the Millstone legislation and on a bill that scoops up pieces of other energy bills. It has the goal of keeping some existing energy programs running and getting some broader policies in place even without a CES in place.

Klee said DEEP has been struggling with how to accommodate Millstone in the CES. “We’re learning a lot about the complexity of the issue,” he said. “There’s the recognition that it is a large carbon-free resource, a large employer — all of those factors are things we’re trying to wrap our head around … if we choose to do a bill.”

“We probably would welcome time to be deliberate and thoughtful,” he said.

The Millstone issue first came up at the end of the 2016 legislative session when Millstone’s owner, Dominion Energy, like other nuclear plant owners around the country, told lawmakers that cheap natural gas power had made it hard to compete financially under its current structure of selling long-term contracts to middleman buyers such as hedge funds. Dominion argues that it would be cheaper for consumers if it could sell directly to utilities or have some other way to guarantee a market for its power, and that it should be able to compete with other carbon-free sources of power. Otherwise, Dominion says, it could be forced to shut down the Millstone station’s two units. Together they are the largest power plant in New England — 2,100 megawatts – and also account for half of Connecticut’s electricity.

Similar threats in New York and Illinois resulted in subsidy packages to keep plants open. And Dominion had already shown it wasn’t kidding around, closing its Kewaunee Power Station in Wisconsin in 2013 because of the economics of competing with natural gas.

Hastily pulled together legislation in the last few days of the last session would have allowed Millstone to compete against other large-scale clean-energy providers in selling energy, but the bill never made it through.

Dominion was successful, however, in spooking legislators and business leaders. So the Millstone issue is back this session.

The state’s plan had been to formulate policy for how to handle the situation in the context of an overall energy strategy. The updated CES was supposed to have been out late last year with specific recommendations for how to keep Millstone operating until the licenses for its two units run out in 2035 and 2045, while at the same time preparing strategies to replace them — especially with large-scale renewable, or at least clean, power.

But legislators are not getting that big picture strategy from the DEEP. Right now, they’re barely getting a little one. And details matter here — a lot.

The Millstone legislation that came out of committee essentially allows it to compete with a lesser class of renewable energy, including anaerobic digesters and trash-to-energy facilities.

“The reality of the competition being set up for Millstone is no competition at all,” said Bill Dornbos, who heads the Connecticut office of the environmental advocacy group Acadia Center. “It’s a competition that’s going to have one winner.”

But the legislation also has some sweeteners in it. One is an extension of the renewable portfolio standard (RPS), which is the amount of renewable generation the state is required to buy. The bill increases the amount from 20 percent by 2020 to 40 percent by 2040. ( Not enough, critics say. Forty percent by 2030 is needed, they assert.)

It also allows for special consideration for fuel cells — a Connecticut-based industry that has had difficulty competing financially with other clean energy — and extension of a popular commercial renewable energy program due to expire this year.

These are items that will be addressed in the CES,  and most also are included in the new catch-all bill, along with other initiatives. Most critical among those other items is the inclusion of offshore wind as part of what the state would be allowed to buy. 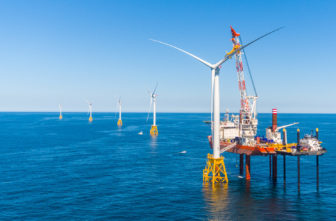 A “jack-up vessel” installs the final blade on a wind turbine in the Block Island Wind Farm.

Klee confirmed that the state has been in discussions with Massachusetts, which a few weeks ago released a draft request for proposals for some of the 1,600 megawatts of wind it is required to buy from several large wind areas off New England and New York. The draft included a way for Connecticut to participate as well.

“We talked with them to have them put in a placeholder for us,” Klee said.

That’s important for a lot of reasons — some of which relate directly to Millstone.

Offshore wind represents an economic development opportunity in the same region where Millstone now has 1,100 employees and produces a $1.5 billion yearly economic impact. It also represents one of two primary ways to replace big swaths of Millstone’s power. The other is Canadian hydro.

But the key item as the legislature wrestles with what, if anything, to do about Millstone, is whether Millstone really needs help.

Show me the money

A study by a graduate student at MIT on the profitability of all 61 operating U.S. nuclear plants shows both Millstone units together with the highest net profit per megawatt-hour between now and 2019. Two-thirds of the nation’s plants are unprofitable.

Dominion’s own earnings report for the first quarter of 2017 shows earnings up over the same quarter last year. And any number of investment analysts have rated Dominion stock a “buy.”

Lawmakers and other state officials have continued to ask Dominion to open their books, something Kevin Hennessy, Dominion’s director of federal, state and local affairs in New England, calls a “red herring.” 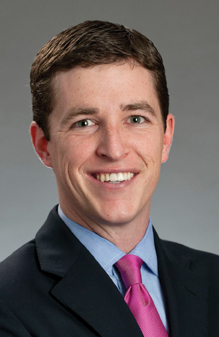 “People who don’t like us and don’t want us to compete use that,” he said. “Open our books in a competitive process – no way we would do that.”

Hennessy discounted the MIT study, saying it paired the two Millstone units, but not the two at Indian Point in New York, which may have changed the outcome. And he contended there was little accounting for the cost of doing business in Connecticut being much higher than other parts of the country.

On the overall financial health of Dominion: “Dominion is not Millstone,” he said. “Millstone like every other asset we own has to sink or swim on its own. If Millstone doesn’t perform the way Dominion wants, they’ll make a business decision.”

He repeatedly noted that Millstone was not threatening to close, but said if no legislation came out of the session, the plant would not be immune to overall market forces and commodity prices. The state is “not bailing us out. They’re not paying a subsidy or a fee,” he said. “It defies logic.”

He said it would have been helpful to have the CES “to get an idea where we’re going.” In the meantime the energy committee is “trying to plan for a future without nuclear power,” he said. “We have an opportunity to get ahead of that curve and solve a problem before it starts.”

He also warned that if a bill to help Millstone doesn’t pass this year: “I think we’ll see them leave the market in a few years, and that’s not a risk I’m willing to take.”

Rep. Jonathan Steinberg, D-Westport, also an Energy Committee member and a strong supporter of renewable energy, said he was still on the fence. “I still am very much concerned. If we are calling their quote-unquote bluff — they could call us on it,” he said. “We have to take them pretty seriously. Dominion has shut down nuclear facilities before.”

He worried that if the session ends with no action on Millstone, the company will lose confidence and potentially leave anyway. “We’re already a high energy price state, do we want to take that risk?”

But others say they really can’t tell if there’s a risk.

“Without understanding Millstone’s financial position, it’s very hard to assess what’s in the best interest of consumers or ratepayers,” said Claire Coleman, climate and energy attorney at Connecticut Fund for the Environment.

Reed said she still thinks there can be an agreement on Millstone this session. Her preference is for the state to buy power directly from Millstone, in a contract no longer than five years long, covering no more than half Millstone’s output. At the same time she wants more renewables to get fast-tracked onto the grid to ultimately replace Millstone.

“We really want to take a hard look at the role of Millstone, its longevity, how to transition into what’s coming next and do it reliably,” she said. “The idea that we just walk away — ‘OK that’s that,’ and pretend that this problem will go away is magical thinking.”

Indoor closings at Connecticut parks due to COVID-19

DEEP closes more than a dozen recreational facilities to the public due to COVIC-19, with an eye towards how to handle its parks and forests this summer.