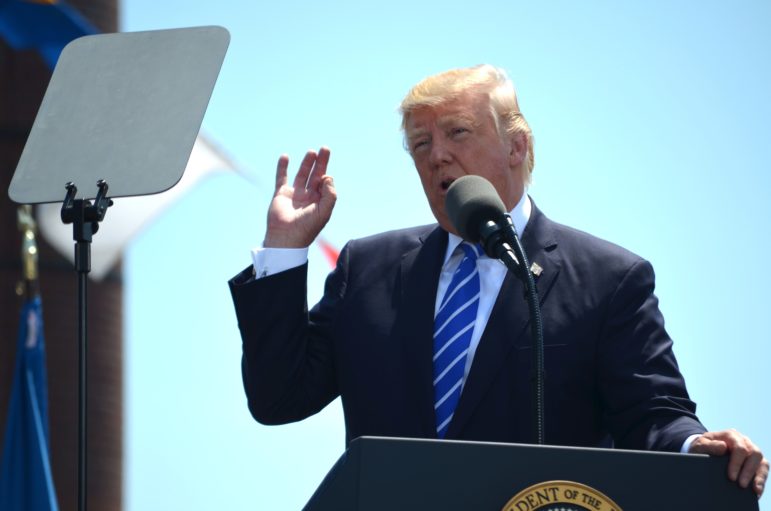 New London — For about 15 minutes at the U.S. Coast Guard Academy Wednesday, President Donald J. Trump delivered the mix of praise, congratulations and acknowledgements traditional in a commencement address.

Then, with the words, “I want to take this opportunity to give you some advice,” his tone shifted.

By its end, Trump had turned his commencement address into a combination rally and commentary on his present adversity. Much of the audience of about 4,000 people responded with applause after each line, and gave the president a standing ovation as he concluded his remarks.

“Look at the way I’ve been treated lately,” he said as members of the audience laughed. “Especially by the media. No politician in history – and I say this with great surety – has been treated worse or more unfairly. You can’t let them get you down. You can’t let the critics and the naysayers get in the way of your dreams.” 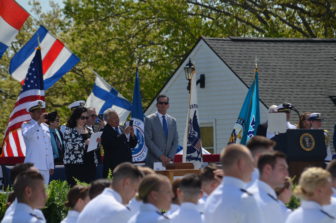 The audience broke into applause.

With a cool breeze blowing on the banks of the Thames River, Trump delivered his remarks amid growing controversy.

Trump fired FBI Director James Comey last week as the agency was investigating possible Russian interference in the 2016 election and ties to the Trump campaign and Trump associates.

The president’s troubles then grew after press reports that he disclosed classified intelligence to Russian officials during a private White House meeting, potentially compromising an American ally that was the source of the information. Yesterday the New York Times disclosed that Comey had written memos describing a request from Trump not to pursue the FBI’s investigation of former national security adviser Michael Flynn’s contacts with Russia.

Still, Trump stayed on message as he wooed the crowd with familiar themes, telling attendees that development of the border wall is underway, health care reform is getting closer and big tax cuts are coming.

Trump repeated his claim that he had won big cost reductions on the F-35 stealth fighter jet, whose engines are built by Pratt and Whitney. But despite Trump’s boast, the Pentagon already had negotiated a lower price for the next lot of F-35s last summer, before he was elected president.

Trump also thanked Gov. Dannel P. Malloy for attending the commencement, since, as Trump acknowledged, he’s a bit tied up with the state’s budget crisis. 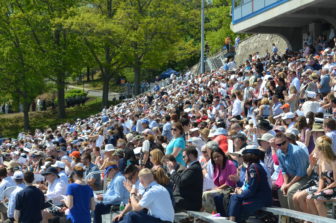 “We’re glad you could join us,” Trump said. “I know how busy the governors are nowadays. They’re out there fighting. It’s never easy. Budgets are a little tight. But we’re doing a job. All of us are doing a job, working together.”

Malloy said after the event his exchanges with the president were pleasant, if perfunctory.

“He said, ‘If there’s anything I can do for you, let me know.’ Nothing substantive,” Malloy said.

Trump spent the early part of his speech lauding the work of the Coast Guard, and praised the academy’s 195-member graduating class for their community service.

“You chose the path of service,” Trump said. “You chose hard work, high standards and a very noble mission: to save lives, defend the homeland and protect America’s interests around the world. You chose the Coast Guard.”

Trump called the Coast Guard the “gold standard,” and said the American people would place their trust in the graduating class, knowing they are “always ready.”

“You’ll bring law and order to the dangerous waters, as boating officers,” Trump said. “You will block illegal shipments of cash, weapons and drugs. You will battle the scourge of human trafficking – something that people haven’t been talking about, one of the big, big plagues of the world.”

U.S. Coast Guard Commandant Paul F. Zukunft said it was “an honor” that, in the first year of his presidency, Trump chose to attend the academy’s graduation despite its small size compared to other military academies. 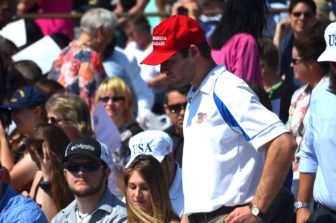 “We have out-muscled the Air Force Academy, West Point and Annapolis, because we have landed our commander-in-chief to preside at this day’s commencement,” Zukunft said.

The commencement address was Trump’s second since taking office. He delivered the keynote at Liberty University’s commencement in Virginia last weekend.

Before Trump flew out of Washington, D.C., Wednesday morning, protesters and supporters already had rallied near the Coast Guard Academy campus.

The Day of New London reported about 200 people attended the anti-Trump protest, while a few dozen attended the pro-Trump rally. Both were relatively uneventful. Attendees waved signs and chanted as cars and pedestrians passed by.

Those inside the stadium showed few signs of their political affiliation, aside from a smattering of “Make America Great Again” hats.