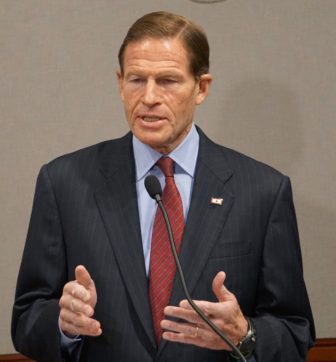 Washington – Sen. Richard Blumenthal on Thursday had strong words about President Donald Trump’s early morning tweets, including one saying he was the subject of a “witch hunt.”

Blumenthal said Trump’s angry tweets were an attempt to intimidate a newly appointed prosecutor who will investigate whether the Trump campaign colluded with Russia’s attempt to influence the U.S. elections.

“President Trump is showing his contempt once again for the rule of law,” Blumenthal said.

A day after Wednesday’s appointment of former FBI chief Robert Muller as special counsel to head the Russia probe, Trump tweeted, without evidence, about what he called the “illegal acts” committed by the Obama administration and the campaign of his former opponent, Hillary Clinton — and said they never led to the appointment of a special prosecutors.

“With all of the illegal acts that took place in the Clinton campaign & Obama Administration, there was never a special councel appointed!” Trump tweeted, later correcting the spelling of counsel.

In a second tweet, Trump added “This is the single greatest witch hunt of a politician in American history!”

To Blumenthal, the tweets were an attempt to intimidate Mueller, and restrict his mandate.

Under the federal law that established the office, a special counsel reports to the Justice Department but has his own budget and control over the day-to-day operations of his or her investigation.

Mueller’s appointment has been highly praised by both congressional Democrats, including Blumenthal, and Republicans. Blumenthal said Mueller had “grit” and the “backbone” to conduct a thorough investigation.

“The best sign that he will need that grit is Donald Trump’s tweet about witch hunts,” Blumenthal said.

Blumenthal said, “The setting (for the Rosenstein briefing) is completely inadequate.”

“He needs to testify under oath and in public,” the senator, a member of the Senate Judiciary Committee, said.