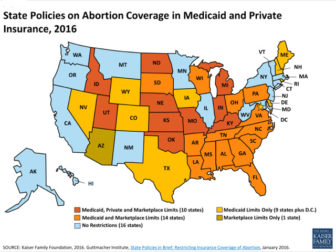 Washington – As Senate Republicans meet behind closed doors this week to craft their bill to replace the Affordable Care Act, one of the most contentious issues is how it will affect the abortion coverage millions of American women now have as part of their health insurance policies.

The American Health Care Act, approved by the U.S. House earlier this month, bars anyone receiving a federal subsidy from buying a policy that includes abortion coverage.

That means those who now receive ACA subsidies to purchase insurance would no longer be able to buy a plan in Connecticut that offered abortion coverage – except when the life of a mother is in danger or in cases of rape or incest.

Under the AHCA, Obamacare subsidies available to those who purchase insurance through state exchanges would continue through 2018 and 2019, but they could not be used to purchase policies that include abortion coverage.

Abortion coverage could not be offered in small group policies subsidized under the ACA, either.

Beginning in 2020, the ACA’s subsidies would be replaced by new refundable tax credits for everyone except the very wealthy, in the amounts of $2,000 to $4,000, based on age. Those receiving the tax credits would also be barred from purchasing policies that covered abortion services.

Under the ACA, the use of federal funding for abortion was also banned, but those receiving subsidies could pay separately for the coverage. The premium was often as low as $1 a month, to secure abortion coverage.

That option is not allowed under the AHCA.

“The AHCA restores pro-life principles to the health care system —a system that should inherently protect life, not seek to destroy it,” said House Speaker Paul Ryan, R-Wis.

The House’s abortion restriction, now under consideration as the Senate drafts its own repeal and replacement plan, is a huge problem in New York and California, which have passed state laws requiring all health insurance policies to cover abortion.

That’s not the case in Connecticut, where abortion coverage is an option for the state’s health insurers. But many Connecticut plans offered this type of coverage.

Connecticut is among 16 states that place no restrictions on the type of abortion coverage available to women through individual policies purchased on the Access Health CT exchange or bought outside that exchange. Other states bar the coverage except for narrow exceptions for women whose pregnancies endanger their life or are the result of rape or incest.

About 40 years ago, Congress first approved the Hyde amendment, which bars federal dollars from supporting abortion coverage under Medicaid, the joint federal –state health care plan for the poor that is known as Husky in Connecticut. The Hyde amendment also included an exception when the mother’s life is endangered or in cases of rape and incest.

In the years since, anti-abortion proponents in Congress sought to do something similar with private insurance. The AHCA provided that opportunity.

The House GOP health care bill would also defund Planned Parenthood. The defunding would only last a year because of the federal budget cycle and need to be renewed in other legislation to continue.  But the funding cutoff would deal a massive blow to the organization. 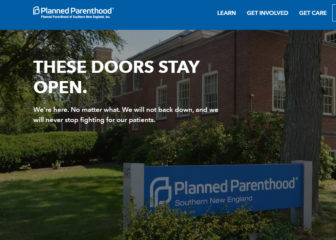 The home page of Planned Parenthood of Southern New England.

“THESE DOORS STAY OPEN,” says the web site of Planned Parenthood of Southern New England. “We’re here. No matter what. We will not back down, and we will never stop fighting for our patients.”

The organization, which sees patients in clinics in Connecticut and Rhode Island, serves about 60,000 people a year.

Under the AHCA, Planned Parenthood of Southern New England would also lose several million dollars in grants it now receives from the federal government. 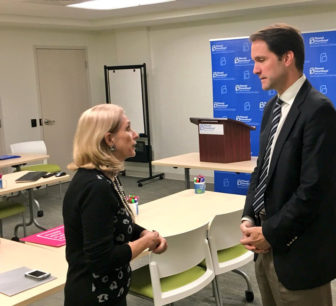 Susan Yolen of Planned Parenthood talking to U.S. Rep. Jim Himes, D-4th District, about the uncertainty facing the agency since the new federal administration took over.

“You see their town halls, someone in the audience is always pointedly asking about Planned Parenthood,” Yolen said.

A few Republican senators – Lisa Murkowski of Alaska, Susan Collins of Maine and Dean Heller of Nevada have been opposed to defunding Planned Parenthood, although Heller has waffled.

Yolen said “abortion has almost always been traditionally covered” under most health insurance policies in Connecticut and much of the nation. Even so, many who seek abortion services from Planned Parenthood, including young women still on their parent’s policies, often chose not to use their insurance coverage for reasons of privacy.

According to the Kaiser Foundation, an early-term abortion costs about $400 to $500, which is often out of reach for low-income women. Later term procedures can cost much more.

While the AHCA abortion restrictions would not affect those who receive health care benefits through their employers – unless they belong to a small group plan – Yolen said the new law would provide a disincentive for insurers to continue to offer such coverage.

“Carriers would take abortion out of all of their plans, saying ‘screw it, it’s too complicated,’” she said.

Meanwhile, a panel of 13 Republican senators are meeting on Tuesdays and Thursdays to craft the Senate health care plan. Having met four times, the panel’s strategy appears to be floating some of their ideas to the media, but there is no comprehensive plan yet.

For instance, Sen. John Thune, R-S.D., has suggested tax credits to help Americans buy health insurance be pegged to income instead of age like the House bill does. Other ideas are to boost subsidies for people living in states with high medical care costs, like Connecticut, and curbing the AHCA’s cuts to Medicaid.

Democratic senators, who have been locked out of negotiations over the Senate’s health care bill, have complained that there will be no committee hearings on the legislation and say it is been crafted in deep secrecy.

Sen. Chris Murphy tweeted this week the GOP Senate health care panel is benefiting from the refocusing of congressional attention on FBI Director James Comey’s firing and its aftermath.

“Your morning reminder that under the cloud cover of the FBI story, 13 GOP Senators are still secretly writing a bill to destroy the ACA,” Murphy tweeted. On Wednesday, a group of Republican governors, led by John Kasich of Ohio, sent a nine-page proposal crafted in February to the Senate panel.

Among the governors’ recommendations is that the Senate maintain the expansion of Medicaid, which has allowed states like Connecticut to expand coverage to tens of thousands of people.

Kasich recently called the AHCA  “inadequate,” and said it would leave millions of people without affordable coverage and “living in the emergency rooms again.”