A ‘hard freeze’ in New Haven 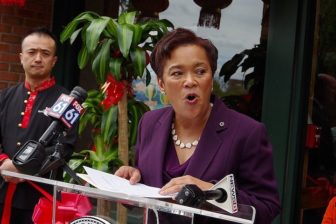 In the wake of a last-minute $1.9 million cut in state aid, Mayor Toni Harp has announced a “hard freeze” on city spending through the last six weeks of the fiscal year.

Harp spoke about the freeze during her latest appearance on WNHH radio’s “Mayor Monday” program.

The Malloy administration informed the city last week that it plans to hold back $1.9 million in planned aid to New Haven for this fiscal year due to the latest unanticipated drop in state tax collections.

The city’s fiscal year ends June 30. To avoid ending it in the red, Harp said, she instructed her department heads they may not spend any more money this year that isn’t already contracted, “unless it’s needed for public safety.”

In addition to last week’s cut, the Malloy administration also recently informed the Board of Education that $1.3 million in promised aid this fiscal year won’t be coming after all. Harp said the school board will have to enact measures similar to her freeze. “I’m hoping that they will end in the black, but they may not,” she said.

All of this is just a prelude to tougher decisions facing the city for its upcoming fiscal year.

The Harp adminsitration’s proposed $554.5 million budget is making its way toward the final stages of review and approval by the Board of Alders. The proposed budget counts on a $31 million increase in state aid based on assurances received earlier this year in Hartford. Harp acknowledged Monday that it now “looks likely” that that $31 million won’t all materialize.

On Monday, Gov. Dannel P. Malloy announced he plans to cut planned municipal aid another $700 million in the upcoming two-year budget due to the state’s projected $5 billion budget deficit. (Click here to read more about that.)

Harp said she and Board of Alders leaders are “looking at alternative ways to balance the budget.” The one last big hope from Hartford appears to be some version emerging of the governor’s proposal to allow cities to tax real estate owned by local not-for-profit hospitals, which included a promise to have increased federal Medicaid payments reimburse the hospitals for the lost revenue. Harp had originally opposed the idea, then embraced it if the state can come through with a guarantee to make up any reimbursement shortfalls to the hospitals. She said Monday that legislative leaders are working on a new version of that proposal that uses the term “payments in lieu of taxes” rather than straight-out “taxes.”