CT GOP gets a boo-boo in Yogi Bear attack 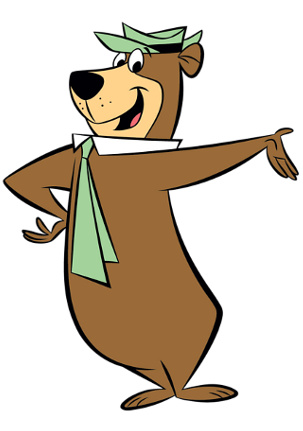 The GOP accused Sen. Mae Flexer of Killingly of wasting state resources by using “state-paid staff” to prepare her amendment, while she actually recycled an amendment prepared last year by two Republicans, Rep. Craig Miner of Litchfield and Sen. Clark Chapin of New Fairfield, to a bill prohibiting feeding bears and other wild animals.

The Miner-Chapin amendment said, “It shall not constitute a violation of this section to feed an American black bear provided such bear is (1) smarter than the average bear, (2) fed from a picnic basket, (3) merely nibbling or noshing, (4) not knowingly featured in or associated with any film production of The Walt Disney Company, or (5) fed from a honey pot provided such pot is of sufficient size, as determined by the commissioner, such that the tongue, snout and head of such bear has sufficient space to extend, lick, sniff and explore, as applicable, without becoming stuck in such pot.”

Flexer’s amendment is identical, except that it turns permission to feed a certain black bear into a prohibition on hunting him. One of the ironies in her reboot is that it was prepared for a bear-hunting bill filed by Miner, a Litchfield lawmaker who succeeded his friend and co-author, Chapin, in the Senate this year.

The GOP was not amused: “Democrats in this state have COMPLETELY LOST THEIR MINDS. They are too busy filing amendments referencing FICTIONAL characters to solve the STATE’S REAL BUDGET CRISIS!”

It ends with an appeal for $10 to fund “a robocall to tell her constituents what is so funny while the owe $$$.”

Republican State Chairman J.R. Romano said he was unaware Flexer’s language was the work of two Republicans, one still a member of the Senate. His shots at Flexer can be applied to Miner, he said.

“It applies to Hartford in general,” Romano said.

Knowing the original authors would have made no difference, he said.

“I would have been just as critical,” Romano said. “If we had a growing GDP, a growing economy, if you want to be cute and tease each other then, OK. It’s not the time, not the place.”

One difference in the two tongue-in-cheek amendments is that the Miner version actually was called during a debate last year on the bear-feeding bill, which passed the House and never came up in the Senate. Flexer never offered her’s during a debate on Miner’s bill in the Senate last week. 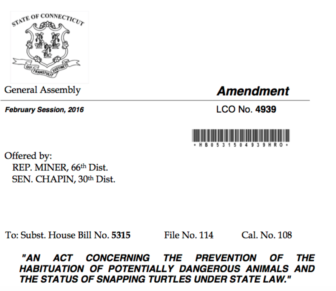 The bill, which would have authorized the Department of Energy and Environmental Protection to allow bear hunting in Litchfield County, was gutted by an amendment offered by Senate Majority Leader Bob Duff, D-Norwalk, that turned it into a measure discouraging big-game trophy hunting.

Flexer said she cribbed the Miner-Chapin language as an homage to what insiders enjoyed last year as a spot-on parody of legislative writing. Flexer sits next to Miner in the Senate.

“This kind of attack is what’s contributing to the inability of Republicans and Democrats to just get along as people,” Flexer said. “This was intended as a lighthearted joke I knew Craig would get.”