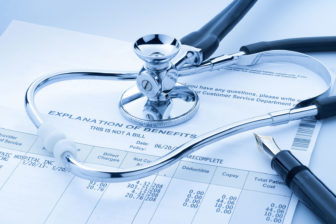 An illustration from the Congressional Budget Office analysis.

Washington – An analysis of the likely impact of the final House GOP bill to repeal and replace the Affordable Care Act says it would leave an additional 23 million uninsured and reduce the federal deficit by $119 billion over the next decade.

The bill’s impact in Connecticut would depend on how the state decides on choices the legislation provides for changing insurance regulations. A major goal of the American Health Care Act is to shift responsibility for health care from the federal government to the states.

As part of that strategy, the bill would allow states to request “waivers” from the present mandates on insurance companies — but the analysis, by the Congressional Budget Office, said that might result in substandard coverage and higher premiums for older Americans and those with pre-existing health conditions.

The CBO’s analysis or “scoring” of the AHCA’s impact, said an additional 14 million Americans would lose their insurance next year and the number would rise to 23 million in 2026. That estimate of new uninsured is only slightly less than the 24 million estimated for an earlier draft of the bill.

The CBO estimate that the AHCA would reduce the federal deficit by $119 billion over a decade is less than the $150 billion in savings projected for the earlier draft.

In assessing the impact on consumers, the CBO said listed three scenarios based on how states might use the flexibility the AHCA would offer.

The CBO estimated about one-third of the U.S. population would live in states that would make “moderate” changes to the “essential health benefits” an insurer must now provide. Those states would see premiums fall, because “on average, insurance policies would provide fewer benefits.” The amount premiums would drop over the next decade would vary widely, from 10 percent to 30 percent, depending on geography, the CBO said.

Any changes Connecticut would make to the benefits an insurer must provide would have to comply with a state law that mandates certain coverages, or that law would have to be changed.

The CBO estimated that about one-sixth of the U.S. population would live in states that made substantial changes to present coverage requirements.

Not only would those states allow insurers to offer fewer benefits, they also would allow insurance companies to revert to rating policies the way they did before the Affordable Care Act became law – basing premiums on the health of an individual. Obamacare forced insurers to rate their policies on the characteristics of a population in a certain area – a practice known as “community rating.”

Under this scenario premiums would fall, but “they would vary significantly according to health status and the types of benefits provided, and less healthy people would face extremely high premiums…”

In a third scenario, the CBO estimated that about half the nation’s population would live in states that did not ask for waivers to change insurance requirements.

It said premiums would be “about 4 percent lower in 2026 than under current law, mostly because a younger and healthier population would be purchasing the insurance.”

But the AHCA’s change to a rule that protects older people – insurers can now charge them no more than three times the rates they charge the young — would push up the cost for seniors. Under the AHCA, insurers can charge older people five times as much as younger ones.

A damning finding for supporters of the AHCA is the CBO’s determination that it would be hard for many who have pre-existing health conditions to afford their coverage, even with the billions of dollars the bill would pride to states to establish high-risk pools or otherwise subsidize insurance costs for these individuals.

‘Lipstick on a pig’

The AHCA passed the House by a two-vote margin. Senate Republicans are working on their own bill.

But Sen. Chris Murphy, D-Conn, said on Wednesday that the panel of 13 Senate Republicans tasked with writing a health care bill will use the House bill as a template.

“Let me assure you they are using the House bill as a foundation for their negotiations,” Murphy said.

He called the AHCA “a human catastrophe” and said the CBO proved the idea that high-risk pools do not work.

An avalanche of congressional Democrats seized upon the CBO scoring to scorch GOP efforts to replace the Affordable Care Act.

“They tried to put lipstick on a pig and they have made a mess,” said Sen. Ron Wyden, D-Ore. Sen. Richard Blumenthal, D-Conn., called the AHCA a “horror show.”

“In addition to a war on seniors, it’s a war on women’s health care,” Blumenthal said. “It’s a nightmare and it’s got no pulse because it’s got no heart.”

The AHCA would end federal Medicaid funding and grants to Planned Parenthood, which Democrats – and a few Senate Republicans – oppose.

The House-approved health care bill also would replace the ACA’s subsidies to people to purchase insurance – which are determined by income level – with refundable tax credits in amounts between $2,000 and $4,000, based on age, to everyone except the very wealthy.

The bill also would repeal a number of taxes imposed by the ACA to help pay for premium subsidies and other costs and cut more than $800 billion in Medicaid payments to states over the next 10 years.

Gov. Dannel P. Malloy also blasted the AHCA based on the CBO’s scoring, saying it is evidence Presidnet Donald Trump broke his promise to reduce the uninsured rate and protect people with pre-existing health conditions.

“We can now confirm that under this plan, Americans will pay more for less coverage,” Malloy said. “An additional 14 million consumers are estimated to be uninsured by 2018, and 23 million more consumers will lose insurance over the next ten years. Trumpcare is as cruel as it is dangerous for the health of our citizens and the long-term prosperity of the United States.”

Malloy also urged Senate Republicans to “wholly reject the House bill and work with Democrats to craft a law that builds on the successes of the Affordable Care Act.”

Republicans, however, touted the deficit reduction cited in the CBO, as well as the reductions in premiums that would eventually occur under the AHCA.

“Today, the CBO confirmed the American Health Care Act will further lower premiums, deliver more immediate tax relief for individuals and families, and decrease the deficit,” said Rep. Kevin Brady, R-Texas, one of the authors of the legislation. “This report makes clear ACHA is an important step toward rescuing Americans from Obamacare’s failures—including fewer and fewer health care options and higher and higher premiums.”

“That is why the House took action and passed the American Health Care Act,” McCarthy said. “Our plan will lower premiums, create more health care choices, and refocus programs like Medicaid on helping Americans that need it most.”