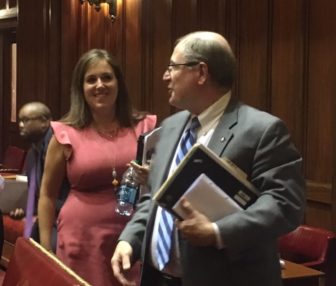 A bipartisan moment between Sens. Mae Flexer and Kevin Kelly after passage of an ACA-releated bill

The Connecticut Senate voted unanimously early Friday morning to essentially take out an insurance policy to protect women and children against the possibility President Donald Trump succeeds in repealing or significantly weakening the Affordable Care Act.

The bill would mandate continued coverage for childhood immunizations, contraceptives and a wide range of services pertaining to women’s health. The measure now goes to the House of Representatives.

“This isn’t just protection against a vote in Congress to repeal the ACA. Administrative decisions as well could limit some of these healthcare options for women,” said Sen. Mae Flexer, D-Killingly, one of the sponsors.

Sen. Kevin Kelly, R-Stratford, a co-chair of the Insurance and Real Estate Committee, said the bill stems from “what’s currently happening in Washington.”

In public hearing testimony earlier this year, the Department of Insurance called the measure premature: “The department believes that it would be prudent to wait to act on topics such as these until there is federal action taken on the ACA.”

A half-dozen health insurers in Connecticut, including Aetna, Anthem and Cigna, called the legislation unnecessary, saying the coverage already is mandated.

Democrats in the Senate immediately issued a press statement under the headline: “Connecticut Senate Stands Up to Donald Trump & Washington Republicans.”

“The endless assault on the Affordable Care Act by Republicans in the United States Congress will result in fewer women having access to health care,” Senate President Pro Tem Martin M. Looney, D-New Haven, said in a statement. “This bill ensures that women in Connecticut will not be denied the ability to obtain critical family planning, breast cancer, osteoporosis and STD screenings and counseling regardless of their economic status, and increases access to prenatal care.”