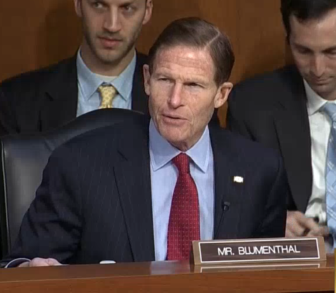 Washington – During Senate debate Wednesday on legislation that would tighten U.S. sanctions on Iran, Sen. Richard Blumenthal said former FBI Director James Comey’s accounts of meetings with Donald Trump may explain why the president is not pressing for tougher sanctions against Russia.

“This testimony from Director Comey is an explosive corroboration of the facts that have been reported, that the president asked for a loyalty pledge, threatened Jim Comey’s job and tried to influence the FBI’s ongoing criminal investigations on multiple occasions,” Blumenthal said. “His conduct shows unequivocally the disdain the President has for the rule of law and clearly demonstrates that he believes that he and his friends and family are above the law.”

Comey, who was fired by Trump, is scheduled to testify Thursday before the Senate Intelligence Committee as part of the panel’s investigation into whether there were ties between Trump associates and Russian meddling in U.S. elections.

But the former FBI director’s written testimony was released Wednesday. It described nine private conversations between Comey and Trump, in person and on the telephone.

“I did not tell the President that the FBI and the Department of Justice had been reluctant to make public statements that we did not have an open case on President Trump for a number of reasons, most importantly because it would create a duty to correct, should that change,” Comey said.

Blumenthal said he is “saddened and I’m chilled that this harrowing account will be given to the Senate Intelligence Committee rather than in fact in a fictional spy novel.”

Trump has repeatedly denied any wrongdoing in his contacts with Russians.

Covid-19 has brought on a behavioral health tsunami, a crisis in the brewing even before the pandemic.

Opinion Abolish solitary confinement. Start with oversight of the Department of Correction

The Department of Correction is unfit to decide who deserves solitary confinement. We must choose humanity over convenience.