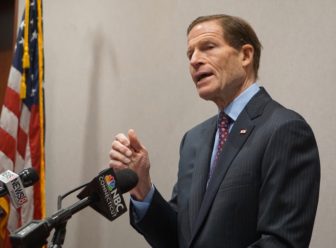 Washington – Sen. Richard Blumenthal wants a federal court in Washington, D.C., to compel President Donald Trump to ask Congress for permission when he benefits from business dealings with foreign government.

Blumenthal heads a group of 30 senators and 166 members of the House of Representatives — all Democrats– who sued Trump Wednesday, saying he is in violation of the Foreign Emoluments Clause of the U.S. Constitution.

The clause was designed to ensure that the nation’s leaders would not be corrupted by foreign influence or put their own financial interests over the national interest.

It requires the nation’s presidents to clear any gift or payment from a foreign leader with Congress.

The Foreign Emoluments Clause says, ”no Person holding any Office of Profit or Trust under [the United States], shall, without the Consent of the Congress, accept of any present, Emolument, Office, or Title, of any kind whatever, from any King, Prince, or foreign State.”

Trump’s vast business holdings have led to concerns, primarily among Democrats, that there is no way to determine whether a foreign government has a way to influence him.

“The president has a far-flung empire of 500 companies doing business in 20 different countries, and we really have no knowledge because he has failed to disclose about all those business operations. We can’t consent what we don’t know,” Blumenthal said. “He has a duty in the very least to disclose what those deals and payments and benefits are.”

The lawsuit said Trump maintains the Foreign Emoluments Clause does not require him to obtain approval from Congress “before accepting benefits arising out of exchanges between foreign states and his businesses.”

It gives several examples of former presidents who obeyed the rules of the clause, including Martin Van Buren, who in 1840 was offered two horses, a case of rose oil, five bottles of rose water, a package of cashmere shawls, a Persian rug, a box of pearls, and a sword by the Imam of Muscat.

The suit said that that Van Buren, writing to the Imam, explained that “a fundamental law of the Republic which forbids its servants from accepting presents from foreign States or Princes, precludes me from receiving” the items and that Van Buren then told Congress  about the gifts.

Congress directed Van Buren to deposit the items with the State Department, the complaint said, and to sell any items that could not “conveniently be deposited or kept” there and give the proceeds to the U.S. Treasury.

The suit said Congress also told President Abraham Lincoln to surrender to the Treasury two decorative elephant tusks and an ornate sword given him by the King of Siam in 1862.

The lawsuit filed by Democratic lawmakers is the third of its kind to target Trump.

On Monday, Washington, D.C., Attorney General Karl A. Racine and Maryland Attorney General Brian E. Frosh filed their own suit that said Trump’s decision to retain ownership of his business empire ”calls into question the rule of law and the integrity of the country’s political system.”

The complaint by the attorneys general cites both the Foreign Emoluments Clause and the Domestic Emoluments Clause, which forbids presidents from receiving compensation beyond their salaries.

Citizens for Responsibility and Ethics in Washington, or CREW, a watchdog group led by Norman Eisen, the chief White House ethics lawyer for President Obama, also has sued Trump in federal court in New York over the emoluments clause.

The CREW suit centers on foreign tenants in New York’s Trump Tower and the swarm of foreign dignitaries who have flocked to the new Trump hotel in Washington, D.C., some of them openly saying they hope their stays bring favor with the White House.

The White House last week asked the court to dismiss the case.

Cornell Law School Professor Michael Dorf said the lawsuits break new ground because no president has ever been sued over  an emoluments clause.

He said most presidents sold off or put in a blind trust assets that might put them in conflict.

As far as the outcome of the lawsuits, Dorf said, “We don’t really know because we’ve never had a president with such a complex financial empire.”

One thing the Blumenthal-led effort may accomplish is the release of Trump’s tax returns. The plaintiffs in the case are expected to seek those returns in pretrial discovery.