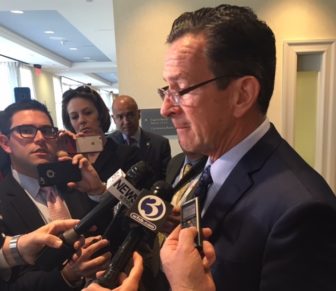 Washington — Despite the shooting of a U.S. Congressman and four others at a Republican Party congressional baseball practice in Alexandria, Va., the issue of gun control was largely on hold Wednesday on Capitol Hill.

Not so in Connecticut, where Gov. Dannel Malloy told reporters in Hartford that the shooting of U.S. Rep. Steve Scalise, R-La., and four others “is a reason why we need, quite frankly, and I’ll say it, saner gun laws in America. I’m thankful no one has lost their life.”

“First and foremost, my prayers and thoughts go out to those who were there, who witnessed it or where injured in it,” Malloy said.

Malloy said, “It sounds like, from what I heard, the weapon that was used could not be acquired in the state of Connecticut currently.” After the shooting of 20 first graders and six educators at Sandy Hook Elementary School in Newtown in December of 2012, Connecticut approved a law imposing a number of new gun restrictions.

The make and model of the weapon used by the shooter, identified as James Hodgkinson of Illinois, has not been publicly identified. It has been described as a “rifle” and a “long gun” by witnesses, who said the shooter seemed to have fired 50 or 60 rounds. Capitol Police officers, who had been detailed to provide security for Scalise, a member of the GOP House leadership, returned fire and shot Hodgkinson, who later died of his wounds.

“According to the Gun Violence Archive, today’s tragic shooting is the 153rd mass shooting incident in the U.S. since January,” Murray said in a statement. “With lax gun laws and more than 300 million guns in the United States, no Republican, Democrat, Independent or unaffiliated citizen is safe from gun violence.”

She said after the Newtown shootings, “Connecticut passed the second strongest gun laws in the nation, and these laws are already saving lives.”

“Regrettably, the senseless shootings of 20 children and six educators were not enough for Congress to take action to strengthen the federal gun laws that would help prevent gun violence in our nation,” Murray said. “The majority of House and Senate Republicans were not courageous enough to reject the corporate gun lobby’s money and rhetoric, and they have helped the gun industry sell more guns that are seeping into more public spaces throughout the nation.”

In contrast with the tough talk from the Newtown Action Alliance, the Brady Campaign’s response to the shooting on Wednesday was muted. The Brady Campaign is a national group seeking tougher gun laws.

“Our thoughts are with those who have been shot and with their loved ones, and we commend the heroic effort by the law enforcement officers who intervened,” said Brady Campaign President Dan Gross in a statement. “All Americans, including our elected leaders, should live in an environment where they can pursue everyday activities without fear of being shot.”

On Capitol Hill, most lawmakers brushed off reporter’s questions about gun control.

Rep. Martha McSally, R-Ariz., who represents the district of former Rep. Gabby Giffords, who also was a victim of a mass shooter, told one reporter, “Let’s focus on what happened today.

“Right now, there’s a moment for us to unify,” she said.