Congressional ball game an act of unity and defiance of violence 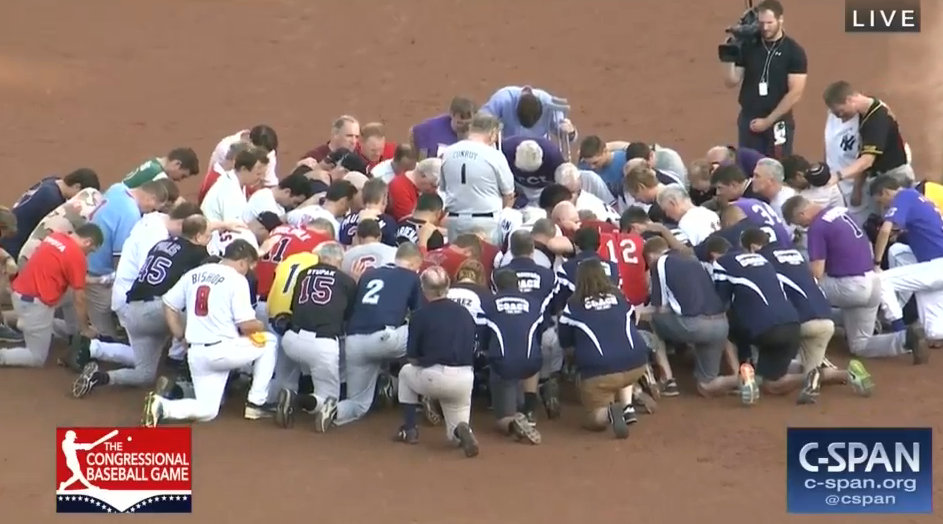 Democrats and Republicans huddle for a prayer before the game.

Washington – In this baseball game, the victorious team gave a member of the losing team the winner’s trophy.

The Congressional Baseball Game, played 36 hours after a gunman’s attack on Republican lawmakers at their baseball practice, was an attempt at unity and an act of defiance in the wake of the shooting.

It began with a video message from President Donald Trump.

“Ladies and gentlemen, let’s play ball!” he said. Trump said by playing the game “you are demonstrating to the world that we will not be intimidated” by threats, or acts of violence.”

The game, a charity match between teams of Democrats and Republicans played nearly every year since 1909, usually draws about 10,000. On Thursday night, nearly 25,000 were in attendance at Nationals Park, the stadium of the Washington Nationals. 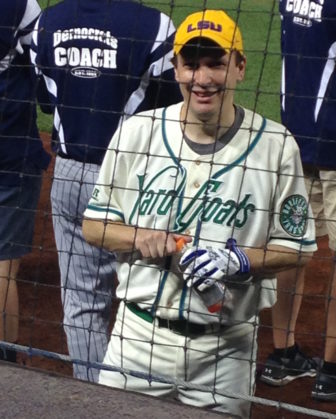 The crowd was a mix of Democrats and Republicans. Many wore red or blue to show their party loyalty, but the spirit was one of unity in reaction to Wednesday’s shooting of four people at a practice field in Alexandria, Va., including Rep. Steve Scalise, R-La., who remains in critical condition. The gunman died from injuries sustained in a shootout with police.

Before the game, Republicans and Democrats prayed together on the field. There was also a moment of silence for the victims of Wednesday’s shootings. Ivanka Trump and Trump adviser KellyAnne Conway were spotted at home plate and the Republican dugout.

“Republicans and Democrats came together tonight to play ball, raise money for some great charities, and stand in solidarity against hatred and violence,” said Rep. Elizabeth Esty, D-5th District, who attended the game. “I hope that this spirit of respect and cherishing of American democracy will carry forward in the halls of Congress and all across our country.”

David Bailey, one of the two Capitol Police officers on Scalise’s security detail who have been credited with saving his life, threw out the first pitch.

The game was a blowout with the Democratic team winning 11-2. But the winning team’s captain gave the trophy to Scalise staffers to present to the congressman.

One of those who helped the team to victory was Sen. Chris Murphy, D-Conn., who played catcher and ran the bases faster than you’d expect.

In his first at bat, Murphy, who has played in every congressional game since his election to Congress in 2007, calmly took four balls without a swing and walked. He was batted in by Rep. Pete Aguilar, D-Calif.

Players wore the uniforms of local teams. For Murphy, it was the Yard Goats. But in honor of Scalise’s alma mater, he word a Louisiana State University cap – as did many others.

Lawmakers who never attended the congressional game showed up for the first time.

But for Rep. John Larson, D-1st District, it was the nineteenth time he had watched colleagues from both side of the aisle play the game.

“I appreciate the spirit and the camaraderie, but it’s hard to get my arms around what happened,” Larson said. “But for the grace of God, it could have happened at the Democratic practice.”

Despite the party atmosphere at the ball park, Larson said Wednesday’s shooting cast “a pall” over the game.

“Speaker (Paul) Ryan did himself credit when he said ‘an attack on one of us is an attack on all of us,’” Larson said.

The question is how long the spirit of unity will last on Capitol Hill, where bitter partisanship has been increasing with each new Congress.

Rep. Jamie Raskin, D-Md., who said he had come to the game to “root for both teams,” said partisanship in Congress “is as American as apple pie.”

“The challenge now is to see if we can confine it so it does not spill into hatred. 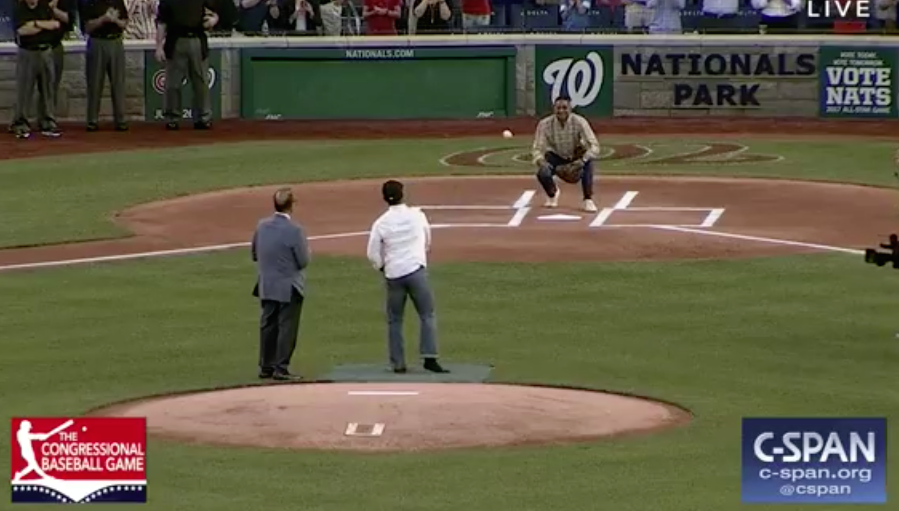 David Bailey, one of the Capitol police injured in Wednesday’s attack, throws out the first pitch. At his left is former Yankees Manager Joe Torre.