Connecticut unemployment stays at 4.9% in May 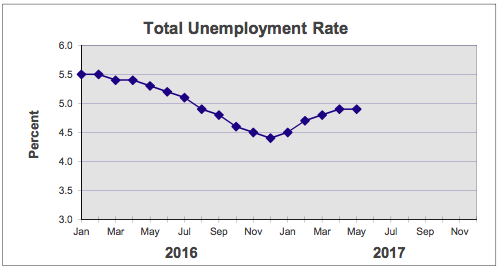 The jobs report released Thursday showed Connecticut’s unemployment rate in May was 4.9 percent, unchanged since April and four-tenths of a point lower than a year ago.  The state had a net gain of 6,700 jobs, a gain partially offset by revised numbers showing a loss of 3,100 jobs in April, nearly double the loss originally reported.

“May payroll job estimates show a sharp increase over April and job growth through May is far ahead of last year’s pace,” said Andy Condon, director of research at the state Department of Labor. “Our unemployment data continues to show growth in the labor force indicating that workers are entering or rejoining the labor force and most are finding employment.”

Private-sector employment grew by 6,000 jobs in May to 1.45 million. The government sector, which includes the two casinos in eastern Connecticut owned by sovereign tribes, grew by 700 jobs to 233,900, but it is down 4,300 over the year and is the biggest source of job losses in 2017.

Seven of the ten major industry sectors grew jobs, with private education and health services leading with 3,200 jobs, according to estimates derived from a monthly survey of businesses.

The separate residential survey found the seasonally adjusted number of the state’s unemployed increased by 1,501, while the number of residents employed grew by 5,313.

Connecticut now has recovered 79 percent of the 119,100 seasonally adjusted jobs lost in the Great Recession of March 2008 to February 2010. The private sector has regained 96.6 percent.

With Rhode Island creeping back to its pre-recession employment level, Connecticut is the only state in New England still looking for a full recovery.

“What we have is a labor maket coming back nickels and dimes. It’s no great shakes,” said Don Klepper-Smith, an economist and advisor to Farmington Bank who tracks the New England economy. “It was encouraging to get an up month for a change. Can we string three or four months of gains in a row?”

At the current rate of recovery, Connecticut’s labor force won’t return to pre-recession levels until 2019, he said.

Hours and wages were flat. The average private-sector workweek was 33.6 hours, down four-tenths of an hour over May 2016. Average hourly earnings of $30.92 were up seven-tenths of a percentage from a year ago. That nets out to average weekly pay of $1,038.91, down half a percentage point.