Whose plan would guide CT government after July 1? 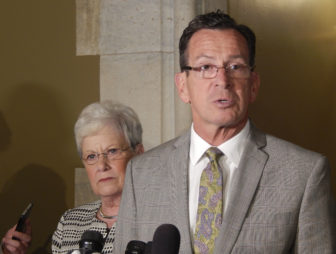 Gov. Dannel P. Malloy showed Connecticut Wednesday how he would run state government if no state budget is in place when the fiscal year begins on July 1.

Meanwhile, legislative leaders from both parties told the Mirror Tuesday that — if a new budget can’t be crafted in time — they prefer Malloy follow a temporary plan drafted by the General Assembly.

And officials from both branches acknowledge that with retirement benefit costs surging and tax receipts shrinking, any post-July 1 scenario would be painful.

“I want to assure the public that while negotiations between my administration and leaders from both the Republican and Democratic caucuses are continuing, we are putting a plan in place in order to allow critical functions of government to continue to operate,” the governor said.

Toward that end, Malloy laid out five principles:

The projected deficit should not grow.

The administration says state spending in on pace to exceed revenues by $2.3 billion, or 12 percent, in the fiscal year that begins 10 days from now.

The single-largest factors behind that potential gap are:

Prioritizing “the most essential … services for our most vulnerable residents.”

The challenge to this principle is that much less funding would be available after July 1.

And General Fund revenues after July 1 are projected to come in $800 million below the amount that was assumed when the current budget was drafted 12 months ago.

Together that’s $1.75 billion worth of problems Connecticut must face after July 1.

Another way to say it is that, after this revenue loss is applied and contractual obligations are met, everything that’s left faces an average cut of 17 percent.

And while the governor wants to prioritize social services, state law stipulates some programs — not supported by federal Medicaid funding — can be provided only “within available appropriations.”

And when no budget is in place, there are no “available appropriations.”

Connecticut builds legal flexibility into its contracts with many of these nonprofits, enabling the state to terminate those agreements easily and with little notice.

“They will be impacted,” Malloy responded when asked about the fate of community-based, nonprofit agencies.

Fiscal capacity must be considered.

When weighing potential reductions in funding, particularly in terms of municipal aid, the state must consider the fiscal capacity of each group, the governor said.

For example, Malloy noted, some of Connecticut’s wealthiest communities have taxable property assessed at an average of $770,000 per person while some of its poorest are closer to $45,000 per person.

Connecticut should comply with court orders and other mandates.

While some expenses are mandated by contractual obligation, still others are fixed by court order, such as most operations of the Department of Children and Families.

No new layoffs for now?

The governor’s final guiding principle states, “We should honor our tentative collective bargaining agreements while such agreements are under consideration by state employees and by the Connecticut General Assembly.”

The governor ordered more than 100 layoffs this spring.

But since then he and union leaders reached a tentative concessions framework worth $1.57 billion over the next two fiscal years. But it also largely would prohibit new layoffs.

Unions are expected to bring this framework to a vote before rank-and-file workers by mid-July.

And while the governor on Wednesday did not specifically rule out layoffs after July 1, this principle implies they are off the table, for now.

Former state Attorney General Richard Blumenthal, in three separate legal opinions — two in 1991 and one in 2003 — recommended that the legislature adopt a short-term budget when lawmakers cannot agree on a long-range plan by July 1.

Forcing the governor to determine what is essential “could cause uncertainty and confusion in the operation and delivery of state services,” Blumenthal wrote in a June 7 opinion. “Doubt and anxiety would be rampant not only among state employees, but also among recipients of services and the public in general.” 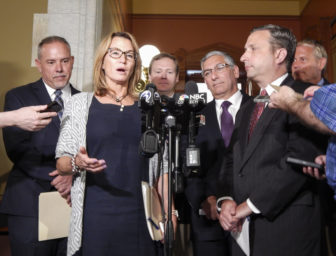 House Speaker Joe Aresimowicz, D-Berlin, said Wednesday that leaders have targeted June 29 as a possible session day — either to vote on a short- or long-term budget.

And leaders told The Mirror this week their preference, if a long-term deal has not been struck by July 1, is to have in place a temporary legislative blueprint, commonly called a continuing resolution.

“We are talking about what a continuing  resolution might look like,” Aresimowicz said Tuesday. “Ensuring that we’re prepared for either scenario is important.”

“The Senate Democrats are focused on crafting a budget for the biennium. We intend to caucus with our members later this week and present an updated proposal in the near future. While we are open to conversations about continuing resolutions, our focus firmly remains on completing a budget by the end of the fiscal year.”

The top Republicans in the legislature, Sen. Len Fasano of North Haven and Rep. Themis Klarides of Derby, also said a continuing resolution, if necessary, is the best option.

“I think we have to at least be talking about that,” Klarides said. “It’s always better to be prepared.”

“You have to have a plan to keep government going,” Fasano said.

Would the governor be open to running the state after July 1 under a temporary plan drafted by the legislature?

“Above all, Governor Malloy’s preference is to have a balanced biennium budget by July 1,” Malloy spokeswoman Kelly Donnelly said. “If the legislature does not deliver on this by the start of the fiscal year, Governor Malloy will not entertain any option that would exacerbate the state’s fiscal challenges over the next biennium. Regardless of which process—whether it be executive order or continuing resolution—is used to operate state government in the absence of a budget, the most important outcome is to avoid short term fixes that will make already difficult budgetary decisions worse.”