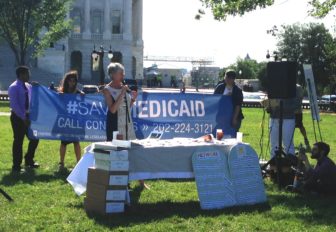 One of several protests against the Senate health care bill at the U.S. Capitol Wednesday.

Washington – Only 16 percent of American voters approve of a Senate health care bill that would repeal and replace the Affordable Care Act, a new Quinnipiac University poll said.

Even among Republican voters surveyed, approval ranged from 37 to 23 percent, “with overwhelming opposition among every other listed party, gender, education, age or racial group,” said the poll, released Wednesday.

McConnell and the White House are expected to try to woo GOP Senate votes during that recess, but the Quinnipiac poll indicates that could be tough.

The poll reported that 46 percent of voters said they would be less likely to support reelection of a U.S. Senator or member of Congress who votes for the Republican plan, while 17 percent said they would be more likely. Thirty-three percent of the respondents said the health care vote wouldn’t matter in their decision.

In addition, 41 percent of voters said the GOP bills to replace Obamacare would boost their health care costs, while 10 percent said their costs would go down and 35 percent said costs will stay the same.

Conducted from June 22 – 27, Quinnipiac University surveyed 1,212 voters nationwide. The poll had a margin of error of plus or minus 3.4 percentage points.

A  USA Today/Suffolk University poll, conducted Saturday to Tuesday, found even weaker support for the Senate health care bill. It determined that only 12 percent of voters supported the bill, while 45 percent disapproved of it.

That poll also said that 53 percent of those surveyed said Congress should either leave the Affordable Care Act untouched or make changes to it while keeping its framework intact.

The Quinnipiac poll also had bad news for the National Rifle Association.

It determined that voters overall support background checks for all gun buyers by 94 to 5 percent – and by 92 to 8 percent among voters in households where there is a gun.