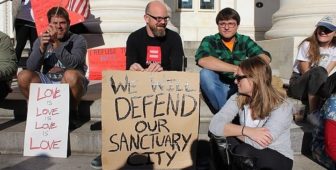 One bill, called  “Kate’s Law” is named for  Kate Steinle, a young woman murdered in San Francisco two years ago allegedly by an undocumented immigrant who was deported multiple times. It would increase the maximum penalties for undocumented immigrants who repeatedly enter the country illegally.

The other bill, called the “No Sanctuary for Criminals Act” would withhold certain federal policing grants from so-called “sanctuary ” jurisdictions that do not fully cooperate with federal law enforcement and comply with requests to turn over incarcerated immigrants when their jail sentences are up.

Connecticut’s TRUST Act,  approved in 2013, says state and local law-enforcement agencies can only detain suspects at the request of Immigration and Customs Enforcement (ICE) beyond the time of their scheduled release under certain circumstances.

The state will honor federal detainers involving undocumented immigrants who have been convicted of a felony or have an outstanding arrest warrant. Being undocumented is only a civil infraction, however, and the detainer Immigration and Customs Enforcement issues for that offense is not a criminal warrant. The No Sanctuary Act “clarifies” the authority of local police, requiring them to honor all immigration detainers.

The bill would also allow federal authorities to refuse to transfer individuals into state or local custody if a state or locality is not in compliance with the No Sanctuary Act.

It also would permit victims of crimes by undocumented immigrant convicts released by local authorities to sue the state and municipality where the crime occurred.

Immigration advocates say the bill punishes jurisdictions like New Haven, Hartford and other Connecticut cities that, in an effort to establish trust in the community, encourage their police officers to refrain from asking the legal status of those they arrest or detain.

Jurisdictions found in violation of the “No Sanctuary Act” would lose a number of Justice Department policing grants, including the Edward Byrne Memorial Justice assistance grants that have provided millions of dollars to the state and Connecticut cities like Hartford and New Haven.

The Fraternal Order of Police urged lawmakers to vote against the bill, saying it would strip communities of needed policing resources.

None of the members of the Connecticut congressional delegation – all Democrats – voted for the Sanctuaries Act. Reps. Joe Courtney, D-2nd District; Elizabeth Esty, D-5th District; and John Larson, D-1st District, were among 24 Democrats voting for “Kate’s Law.”

President Donald Trump on Thursday hailed House approval of the bills and urged the Senate to act soon.

“Sanctuary cities are releasing violent criminals, including members of the bloodthirsty MS-13 gang, back onto our streets every single day,” the president said.

The bills face an uncertain future in the Senate, however, where they could be subject to a Democratic filibuster.